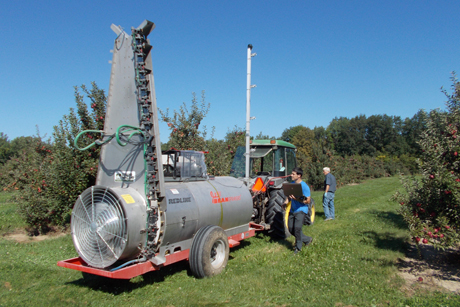 Provided
Postdoctoral researcher Jordi Llorens collects data from the prototype precision sprayer, which has ultrasound sensors mounted on the white mast behind the tractor cab and a variable array of spray nozzles mounted at the back of the sprayer.

It’s a problem that plagues farmers and haunts environmentalists: how to reduce pesticide applications and ensure they are used most effectively. A Cornell engineer has come up with a novel, high-tech solution, using ultrasound sensors to better match sprays to their vineyard and orchard targets.

Traditional sprayers deliver a constant amount of spray along a row and are a poor match for the natural variation within an orchard or vineyard. Droplets can also “drift” nine to 10 rows away from their intended canopy targets, carrying pesticides – and the grower’s investment – into unwanted places, including waterways, neighboring property or sensitive crops.

“Controlling where pesticide droplets land allows for safer use of pesticides,” said agricultural engineer Andrew Landers, a senior extension associate at Cornell’s New York State Agricultural Experiment Station in Geneva, N.Y. “The ideal is uniform deposition, but overshooting is a problem, particularly in early to midseason, when vineyard and orchard canopies are still growing.”

Landers’ goal is a smarter sprayer. The combination of a mobile ultrasound system to “see” the canopy and electronics to calculate the exact tree volume can automatically deploy the correct array of nozzles and rate of air flow to deliver only what is needed, where it is needed.

As reported at the annual conference of the Association of Applied Biologists International Advances in Pesticide Application Jan. 8 in Oxford, England, Landers and postdoctoral researcher Jordi Llorens tested their prototype in vineyards and orchards at different stages of development with a yellow dye to assess the deposition.

“Not only did the spray land where it was supposed to, the reduction in the amount of spray used represents a savings of 22 percent on applications compared to the conventional system,” said Landers.

The system relies in part on a louver system patented by Landers four years ago, which uses a sliding metal panel to adjust airflow on the go. According to Landers, better control of the airflow using louvers alone can reduce pesticide drift by 90 percent. And it’s a compatible retro-fit for the traditional types of airblast sprayers, which account for the majority of fruit sprayers used in orchards and vineyards around the world.

“The whole system is actually quite inexpensive because electronics have become very cheap,” noted Landers.

Landers anticipates that use of such technologies will become more critical as governments start to regulate pesticide use more rigorously.

“Because of growing environmental concerns about spraying, in Australia and Europe there is already new legislation that requires reduction of drift,” said Landers. “But how will the growers do it? The solutions lie in applying classical aerodynamics to applied problems.”

The variable rate sprayer is the latest innovation from Landers’ Pesticide Application Technology program, which uses engineering to reduce drift and develop safer pesticide handling methods. He has also worked extensively with recycling tunnel sprayers that capture 85 percent of the spray, keeping the excess out of groundwater, and reducing annual pesticide use by 35 percent. Many growers have adopted his do-it-yourself, $400 Patternator system for testing their sprayer’s effectiveness.