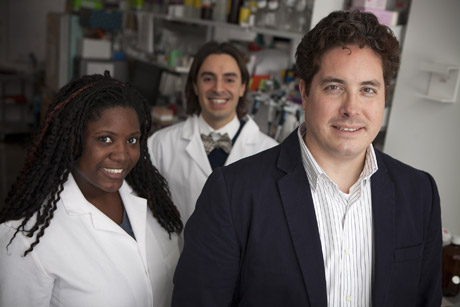 By attaching a cancer-killer protein to white blood cells, Cornell biomedical engineers have demonstrated the annihilation of metastasizing cancer cells traveling throughout the bloodstream.

The study, “TRAIL-Coated Leukocytes that Kill Cancer Cells in the Circulation,” was published online the week of Jan. 6 in the journal Proceedings of the National Academy of Sciences.

“These circulating cancer cells are doomed,” said Michael King, Cornell professor of biomedical engineering and the study’s senior author. “About 90 percent of cancer deaths are related to metastases, but now we’ve found a way to dispatch an army of killer white blood cells that cause apoptosis – the cancer cell’s own death – obliterating them from the bloodstream. When surrounded by these guys, it becomes nearly impossible for the cancer cell to escape.”

Metastasis is the spread of a cancer cells to other parts of the body. Surgery and radiation are effective at treating primary tumors, but difficulty in detecting metastatic cancer cells has made treatment of the spreading cancer problematic, say the scientists.

King and his colleagues injected human blood samples, and later mice, with two proteins: E-selectin (an adhesive) and TRAIL (Tumor Necrosis Factor Related Apoptosis-Inducing Ligand). The TRAIL protein joined together with the E-selectin protein stick to leukocytes – white blood cells – ubiquitous in the bloodstream. When a cancer cell comes into contact with TRAIL, which becomes unavoidable in the chaotic blood flow, the cancer cell essentially kills itself.

“The mechanism is surprising and unexpected in that this repurposing of white blood cells in flowing blood is more effective than directly targeting the cancer cells with liposomes or soluble protein,” say the authors.

In the laboratory, King and his colleagues tested this concept’s efficacy. When treating cancer cells with the proteins in saline, they found a 60 percent success rate in killing the cancer cells. In normal laboratory conditions, the saline lacks white blood cells to serve as a carrier for the adhesive and killer proteins. Once the proteins were added to flowing blood, which models forces, mixing and other human-body conditions, however, the success rate in killing the cancer cells jumped to nearly 100 percent.

As this research is newly announced, King says animal trials will continue and he hopes that the research will proceed to human clinical trials sometime in the future.

Link between inflammation and spread of breast cancer found (Jan. 2013)