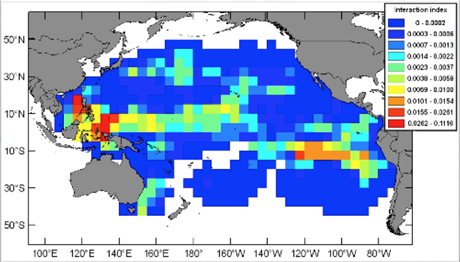 Provided
Red and orange cells predict zones with the highest probability of interactions between turtles and longline fishing industries annually in the Pacific Ocean. 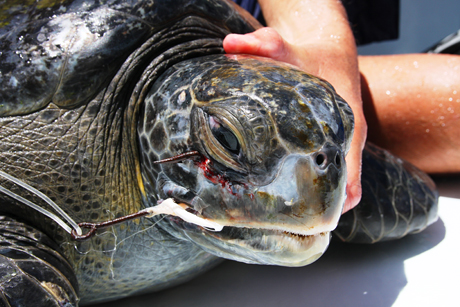 Samuel Friederichs
A green turtle injured by a longline hook off the west coast of Costa Rica.

One of the biggest threats to critically endangered leatherback turtles is bycatch from industrial fishing in the open oceans.

Now, a team of researchers has satellite-tracked 135 leatherbacks with transmitters to determine the turtles’ patterns of movement in the Pacific Ocean. Combined with fisheries data, the researchers entered the information into a computer model to predict bycatch hotspots in the Pacific.

With this information, researchers and authorities hope to work with fisheries managers to avoid fishing when and where there is higher risk of also catching turtles in the area.

Though the ocean is vast and the turtles’ movements are dynamic and unpredictable, the small chance of an individual leatherback getting hooked or caught in fishing lines is multiplied by 760 million in the Pacific Ocean alone, said Stephen Morreale, referring to the number of longline hooks set annually in the Pacific. Morreale is a Cornell senior research associate and adjunct associate professor in the Department of Natural Resources and a co-author of the study published online Jan. 7 in the Proceedings of Royal Society B.

“It’s a waste,” he said. “This is not a case of people merely trying to feed their families. The fishing industry does not want to catch leatherbacks, and the turtles that are caught are just discarded.” 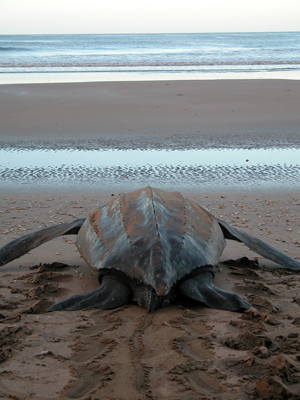 F.V. Paladino
A female leatherback turtle retreats to the sea after laying eggs on a beach in Costa Rica.

Leatherbacks (Dermochelys coriacea) are the largest sea turtles and the most massive reptile, reaching maximum weights of close to 2,000 pounds. The leathery-shelled turtles, which feed on jellyfish, use their flippers like wings to swim vast distances at surprising speeds; they also dive to depths of 1,200 meters, shuttling to and from the surface to breathe.

Once they hatch, males spend their entire lifetimes in the water. They take up to 20 years to reach maturity. As adults, females return throughout their lifetimes to the same nesting beach to lay clutches of 80 to 100 eggs in the sand, which they may repeat every two weeks over the course of a nesting season. Once they have laid all their eggs, they may not return for three to five years.

Because of the many risks over decades that leatherbacks face before they reach maturity, “an adult’s [ecological] value is huge,” said Morreale. Also, since so little has been known about their movements once they enter the ocean, conservationists have historically focused on protecting beach areas where they can be monitored and protected.

But “their protection at sea is extremely important,” and only recently, through satellite transmitters, are researchers beginning to understand the turtles’ complex habits in the ocean, which will hopefully lead to better protection, said Morreale.

Next steps for this research include acquiring more Pacificwide data for interactions between fisheries and turtles, as well as data for the Atlantic Ocean, Morreale added.

John Roe, an assistant professor at the University of North Carolina, Pembroke, was the paper’s lead author, along with Morreale and Frank Paladino at Indiana University-Purdue University at Fort Wayne, while Drexel University professor James Spotila assembled the research team.

Funding was provided mainly by the Lenfest Oceans Program.