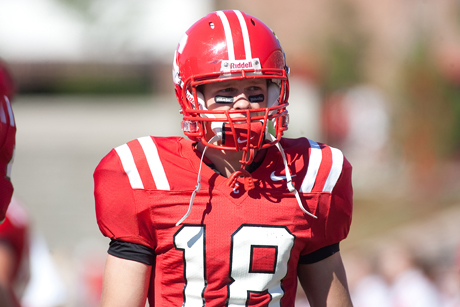 As a kid, Bryan Walters ’10 would don Seattle Seahawks football gear like thousands of other little NFL fans. As a high school football star at Juanita High School in Kirkland, Wash., he saw his hometown Seahawks in the team’s only previous Super Bowl (2005) appearance.

“This is something I always dreamed of – being at the Super Bowl with the Seahawks, with the chance to win and get the first ring for Seattle,” Walters said at Super Bowl Media Day. “You can’t beat it.”

Walters will be the fourth Cornell alumnus to appear on a Super Bowl roster when his Seahawks play the Denver Broncos Feb. 2 at 6:25 p.m. at MetLife Stadium in East Rutherford, N.J. The game will be televised nationally on the Fox network.

In his first full season with the Seahawks, the 6-foot, 190-pound wide receiver played in four games and earned his first career start in week 17 of the regular season. He saw action in the NFC championship game Jan. 19 with nine snaps on offense for the 23-17 win over the San Francisco 49ers.

A little history of Walters

Walters was lightly recruited for college out of Juanita High School despite being one of the top athletes in the state of Washington, a three-sport star. He chose the Big Red over Washington State.

Walters graduated with Ivy League records for career punt return (972 yards) and kick return (2,790 yards) and finished second only to Harvard’s Clifton Dawson on the conference’s all-purpose yardage list with 5,795.

Walters graduated fourth on Cornell’s career reception (144) and receiving yardage (2,032) charts. Despite the accolades, he was just a second-team All-Ivy receiver and return specialist as a senior. Walters led the Ivy League and finished fifth nationally in all-purpose yards per game (171.6 yards per game), the second-best mark in a season at Cornell behind Marinaro’s magical 1971 season that saw him finish as the runner-up for the Heisman Trophy.

Virtually ignored by NFL teams, Walters went through the draft without hearing his name called. When the San Diego Chargers called him after the draft, Walters jumped at the offer for a two-year rookie free agent deal.

He popped up on the radar screen with a 103-yard kickoff return for a touchdown in a preseason game against the Seahawks in 2011. In another game that preseason, he had two impressive catches in the final 10 seconds, including the game-winning touchdown to beat the Arizona Cardinals. That season he opened the year on the roster, making three catches for 27 yards over the first two games. For the next two years, he bounced between being on the “inactive list” and competing on the practice squad, first for the Chargers and then with the Vikings. The Seahawks called him in December 2012.

At the tryout, Seahawks coach Pete Carroll even recalled the kickoff return touchdown. Walters has bounced around between the practice squad and the active roster, and may or may not be on the 46-man roster this Sunday (seven players on each team will be designated as inactive prior to the game). Regardless, he’ll be on the Seattle Seahawks sideline – the team for which he grew up cheering.