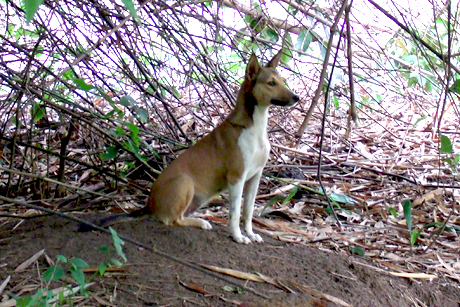 Julia Randall
Genomic sequencing of genetically divergent dogs, such as this basenji from the Congo, together with wolves and other wild canids, provides rich information about the history of domestic dogs.

Dogs were domesticated between 9,000 and 34,000 years ago, suggesting the earliest dogs most likely arose when humans were still hunting and gathering – before the advent of agriculture around 10,000 years ago, according to an analysis of individual genomes of modern dogs and gray wolves.

An international team of researchers, who published their report in PLoS Genetics Jan. 16, studied genomes of three gray wolves, one each from China, Croatia and Israel – all areas thought to be possible geographic centers of dog domestication. They also studied dog genomes from an African basenji and an Australian dingo; both breeds come from places with no history of wolves, where recent mixing with wolves could not have occurred.

Their findings revealed the three wolves were more closely related to each other than to any of the dogs. Likewise, the two dog genomes and a third boxer genome resembled each other more closely than the wolves. This suggests that modern dogs and gray wolves represent sister branches on an evolutionary tree descending from an older, common ancestor. The results contrast with previous theories that speculated dogs evolved from one of the sampled populations of gray wolves.

“This is an incredibly rich new dataset, and it has allowed us to carry out the most detailed analysis yet of the genetic history of dogs and wolves,” said Adam Siepel, associate professor of biological statistics and computational biology at Cornell and a co-author of the paper. “There are still many open questions, but this study moves the ball forward,” Siepel added.

In this case, G-PhoCS provided a detailed picture of the demographic changes that occurred during the divergence of dogs from wolves. The analysis revealed there was a sizable pruning in population of early dogs and wolves around the time of domestication. Dogs suffered a sixteenfold cut in population size as they diverged from an early wolf ancestor. Gray wolves also experienced sharp drops in population, suggesting that the genetic diversity among both species’ common ancestors was larger than represented by dogs and modern wolves. In addition, there was considerable gene flow between dogs and wolves after domestication. Accounting for gene flow was a major challenge in the analysis, and Gronau’s research on this topic proved valuable in obtaining an accurate model of canid demography.

The picture emerging from this study will allow researchers to better interpret genetic differences observed between dogs and wolves and to identify differences driven by natural selection. “This paper sets the stage for the next step in the study of dog domestication that tries to determine the genetic changes that enabled this amazing transformation,” said Gronau.

The study’s senior authors included geneticists John Novembre at the University of Chicago and Robert Wayne at the University of California, Los Angeles (UCLA). Adam Freeman, a postdoctoral fellow at UCLA, was the paper’s first author. Adam Boyko, a Cornell assistant professor of biomedical sciences, also co-authored the paper.

The study was funded by various sources, including the National Science Foundation, National Institutes of Health and Life Technologies.

Researchers use genome sequences to peer into early human history