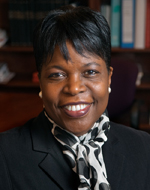 Elmira Mangum, Cornell’s vice president for budget and planning, has been named the 11th president of Florida A&M University. She will serve as the university’s first female president.

Since coming to Cornell in 2010, Mangum has been responsible for managing the Ithaca campus’s more than $2 billion operating and capital budgets. She has provided leadership in applying university resources to meet institutional priorities and academic programming needs in such areas as space planning, institutional research, and business intelligence and information systems.

“We offer our heartfelt congratulations to Florida A&M University for the selection of Elmira Mangum as its next president,” said Provost Kent Fuchs. “This is a visionary choice by FAMU’s trustees and a great accomplishment for Elmira.

“This is also a loss for Cornell. Elmira has helped skillfully manage our budget, and we will miss the leadership and professionalism she brought to this mission. She has been a great leader and a great friend, and everyone at Cornell wishes her well in her new and exciting venture as FAMU’s president.”

“I will miss my colleagues and friends at Cornell in many ways,” Mangum said. “It is difficult to leave the Big Red, but I am excited to move on to join the Rattlers at FAMU as its 11th president.”

Mangum will take the helm of one of the nation’s premier historically black colleges and universities. Founded in 1887, FAMU has an undergraduate and graduate student population of more than 13,000. Mangum’s start date at FAMU has yet to be determined.

Mangum arrived at Cornell during the height of an economic downturn that left many universities reeling in the face of dwindling resources and changing budget priorities. She led Cornell through the difficult process of managing the budget in the midst of a slow recovery, an effort that included the implementation of Cornell’s comprehensive new budget model.

She also led Cornell’s Administrative Streamlining Program, which has sought to enhance administrative efficiency and effectiveness. Among the results has been the reduction of administrative redundancies between colleges and the central administration.

Before coming to Cornell, Mangum spent nine years at the University of North Carolina, Chapel Hill, where she served as senior associate provost. At Cornell, she also held an adjunct faculty appointment in the Samuel Curtis Johnson Graduate School of Management.