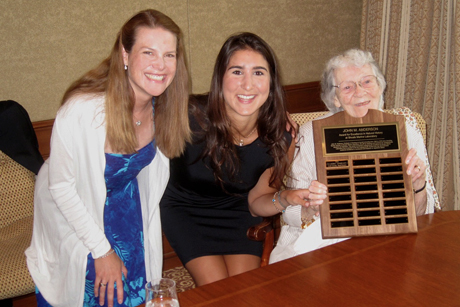 Vanessa Constant ’14, who began taking classes at Shoals Marine Lab in high school, is the inaugural recipient of a new annual award granted by the marine science teaching and research facility six miles off the coast of Portsmouth, N.H.

The John M. Anderson Award for Excellence in Natural History at Shoals Marine Laboratory recognizes a top undergraduate student who has demonstrated sustained excellence in coursework and research at Appledore Island, where the facility is located among the Isles of Shoals.

“It was an exceptional gift to receive the Anderson award because it occurred at such an important time in my career, when I had to make a decision about where to go next,” said Constant, a natural resources major with a marine biology minor, who has applied to graduate schools for a Ph.D. in coastal community ecology.

Constant took her first class at Shoals Marine Lab as a high school sophomore in 2008.

“It stuck with me; I went back for the next three summers,” she said. In 2009, she interned on marine biology projects at Shoals; in 2010, she took Introduction to Marine Conservation Biology; in 2011, she took Biodiversity and Biology of Marine Invertebrates, interned on a research project about seaweed along the island’s intertidal coastal zones, and since then has served as a Shoals Marine Laboratory Alumni Ambassador, giving talks and meeting with students to discuss Shoals. “I don’t think you ever really stop being a member of the Shoals family,” Constant said.

Constant received a National Science Foundation Research Experience for Undergraduates award in 2012, with which she studied community composition and population density of snails in Tanzania. In 2013, she received an Ernest F. Hollings Scholarship, contracted through the National Oceanic and Atmospheric Administration, with a year of academic focus on marine sciences followed by an internship at the Olympic Coast National Marine Sanctuary in Port Angeles, Wash.

The inaugural award honors the late John M. Anderson, professor emeritus of zoology at Cornell and a founding faculty member at Shoals in 1966. Anderson was known for his commitment to helping undergraduates excel, no matter a student’s background, and for his intellectual curiosity, Constant said.

Run by the University of New Hampshire and Cornell in a partnership that has spanned 48 years, Shoals Marine Laboratory hosts undergraduate and community educational programs in marine science, sustainable engineering and ornithology.