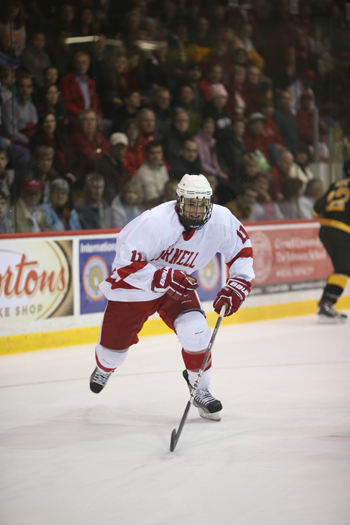 A hot hand may be hokum: Cornell researchers have examined the concept of “winning momentum” with varsity college hockey teams, and they conclude that momentum advantages don’t exist, says a new study in the journal Economics Letters.

“Whether it’s sports commentators or stock analysts who are talking, momentum is routinely assumed to be important on a day-to-day basis,” said Kevin M. Kniffin, a postdoctoral research associate at Cornell’s Dyson School of Applied Economics and Management. “In our evidence, we see that ‘momentum’ is really just illusory.”

Because of student academic obligations during weekdays, NCAA Division 1 hockey programs tend to play their games on weekends – offering a temporal parity that ensures uniform times between games and reduces home-ice advantage factors.

Within the WCHA, uniquely, the home team hosts visitors for games that start on Friday and Saturday nights in the same arena, says Kniffin. “In other words, if you’d expect to see momentum occur from one game to the next, this would be the exact situation where it would occur.”

Said Mihalek: “Lots of coaches preparing for two games in a weekend against different opponents will tend to focus more practice time on the first of the two opponents, partly because of the belief in momentum,” Mihalek noted. “The new paper shows no evidence of momentum across games within a weekend, and, instead, we suggest that teams focus on winning the first game of a weekend because it helps to ensure that they won’t end any given two-game set with a losing record.”

The study, “Within-Series Momentum in Hockey: No Returns for Running Up the Score,” will be published in the March 2014 print edition of Economics Letters. Cornell funded the research.