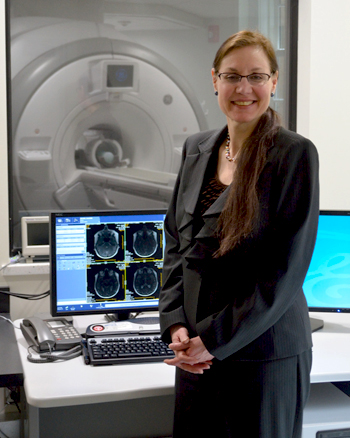 The new Human Neuroscience Institute in Cornell’s College of Human Ecology aims to advance research on the neural basis of human behavior.

Cornell scientists can now observe on campus which areas of the brain fire when we think, react and decide, thanks to a 3-tesla MRI machine in the Cornell MRI Facility in Martha Van Rensselaer Hall that has been in place since 2012. Ready access to functional magnetic resonance imaging (fMRI) gives researchers more power to ask novel questions and test psychological and behavioral science theories with new data, said Reyna, professor of human development. She is leading the first National Institutes of Health-funded study in the facility: A team of economists, psychologists and neuroscientists are using the tool to better understand how teens and adults process emotions, gauge risks and make decisions.

“A lot of psychology traditionally relies on self-report,” Reyna explained. “With the advent of fMRI, brain scan data can be integrated with other data – behavioral, social and ecological – to shed light on the mechanisms driving behavior. We can look at the brain from the micro neurochemistry level to the macro social level, bringing basic research to bear on important human problems.”

But to conduct human neuroscience research and extract meaningful data from the images, far more than an accessible MRI machine is required, Reyna said.

So the new institute is developing other essential research services and tools – such as powerful computing – with a core group of neuroscientists in the Department of Human Development whose aim is to facilitate research, education and outreach in human neuroscience and, ultimately, to inform interventions that improve health and well-being.

The institute’s faculty affiliates are: Adam Anderson, Charles Brainerd, Eve De Rosa and Nathan Spreng. Anderson, associate professor, explores the psychological and neural underpinnings of emotions – what they are, how they are generated in the brain, and how we regulate them. Brainerd, professor, examines how normal aging and disease affect cognitive processes, focusing on factors associated with brain atrophy and memory decline in mild cognitive impairment and dementia. De Rosa, associate professor, uses neuroimaging and behavioral measures in humans and additional measures in rats to study learning and attention, with a focus on the role of the neurochemical acetylcholine. Spreng, assistant professor, uses fMRI to study large-scale brain networks, how these systems interact to support complex cognition and how patterns of brain activity change with advancing age.

Each of these scientists works at the frontiers of basic science, Reyna noted, but they also translate fundamental discoveries about brain function into ways to improve human well-being across the lifespan.

The nuts and bolts of MRI technology

The key advantage of magnetic resonance imaging is that it allows researchers to see inside living tissues, providing detailed pictures of internal structures without using invasive procedures or ionizing radiation. An array of specialized techniques allows scientists to visualize blood flow, the movement of water, the presence and concentration of various organic molecules, moving tissue in real time, and more.

The core of a magnetic resonance imaging machine is made up of coils of wire though which electricity is passed to create a magnetic field, which aligns the spins of hydrogen protons in the water abundant in living things, including humans.

A coil fit specifically for the body part being imaged transmits pulses of radiofrequency waves, causing some of the hydrogen protons to absorb the energy and temporarily change their spins. When the pulse is turned off, they return to their prior state, giving off an energy signal that the coils detect and send to the MRI computer. During imaging, additional small gradient magnetic fields encode this signal with spatial location. A map of the internal tissues can be reconstructed from the signal since protons in different tissues return to equilibrium at different rates.

The most common fMRI method detects changes in blood flow when activated areas of the brain are recharged by fresh blood rich in oxygen and glucose. Oxygen-rich blood has different magnetic properties than oxygen-poor blood, and these differences can be measured and mapped to provide a picture of brain activity. The resulting images require complex processing and statistical analyses to extract meaningful data – the work of computing resources connected to the MRI machine.