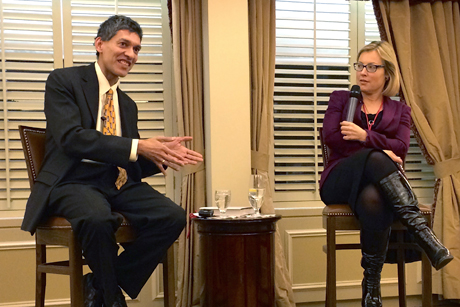 Eswar Prasad, the Dyson School’s Tolani Senior Professor of Trade Policy and a senior fellow at the National Bureau of Economics, makes a case for the vitality of U.S. currency in his newest book, “The Dollar Trap: How the U.S. Dollar Tightened Its Grip on Global Finance” (Princeton Press). Joined by Financial Times columnist Gillian Tett in conversation Feb. 5 at the Cornell Club New York City, Prasad drew on a decade of analytical research on international finance and capital flows to present his stance.

Prior to the Great Recession, the dollar was depreciating at about 1 percent per year and looked to have been already knocked off of its pedestal. The crisis was effective in reversing that trend as foreign markets have turned to safer investment options amidst the economic turmoil.

“Why is there a need for dollars? Because there is a need for safety,” Prasad told the crowd, which comprised alumni and others in the finance industry. “The U.S. has gotten into this win-win situation. If the U.S. dollar were to fall, that would hurt the rest of the world a lot more.”

The American dollar continues to be met with demand despite more dollars being printed. Prasad debunked the notion that currency’s value is certain to become debased by generating a larger supply.

“There must be a limit to the amount you can supply of an asset or good without its price eventually being affected. Logically, the more you have of something the greater the supply, and basic economics tells us the price should fall,” Prasad said. “The world of fiat money is very different because it is the ability to generate large amounts of stored value that actually makes it more valuable. It’s not necessarily the asset that is in limited supply that is most valuable, but actually something that can be supplied very elastically.”

Prasad cited gold and bitcoin as investments that present seductive options because of their limited supply and perceived value retention. However the supply of gold, for example, is too limited for it to become truly viable.

While investing in the U.S. dollar is seen as a safer option for foreign investors, Prasad did offer a caveat in that emerging markets offer investors an opportunity to diversify. The dollar’s stronghold could shift and is, in fact, likely to depreciate against emerging markets over the long term if those markets are able to earn credibility and convince investors that they are able keep inflation low, he said.

Although emerging markets represent competition, the current infrastructure of many of those countries frame them as unlikely candidates. Prasad cited China as having the potential to emerge as a more powerful market, even though the country is not an immediate threat.

“You need to have public-trusted institutions like central systems, a democratic system that is open and transparent ... and an independent judiciary,” he said. Prasad stressed that foreign confidence in the American legal system plays an important role in keeping the dollar valued, since statutorily the U.S. cannot discriminate against foreign investors when repaying debt.

Tett wanted to know where Prasad was personally invested.

“I'm stuck with the U.S. dollar,” Prasad joked, before continuing. “I think the emerging markets are a good place to invest, and they’re still growing very fast. ... Because I live in the U.S., my income comes from the U.S. and as a diversification matter it makes sense for me to invest abroad. But for the rest of the world, they probably should and will come here.”

Kristen Tauer '10 works as an editor in New York City.