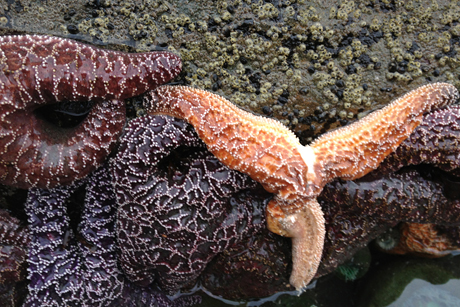 Sea stars off the Pacific Coast are dying en masse at an “unprecedented” rate and geographic spread, and Cornell researchers are trying to find out why.

The sea star wasting syndrome was first discovered last June off the coast of Washington state. Within months, it had spread from Alaska to Mexico. It causes sea stars to become deflated and weak, lose limbs and develop lesions that eat through their entire bodies.

“The geographic extent is vastly larger than we’ve seen before. But the unique and chilling aspect of this event is the number of species involved,” said Drew Harvell, professor of ecology and evolutionary biology, who seeks to understand the nature and extent of the sea star mortality.

“There have been wasting disease events with sea stars before, but it’s normally a single star species. This has involved up to 12 different species – virtually all of the major species have been affected along the entire West Coast.”

Scientists are not clear what’s causing the sea stars to die, but Ian Hewson, assistant professor of microbiology and one of the world’s few experts in viruses among organisms like sea stars, was awarded a rapid-response grant from the National Science Foundation last October when the extent of the sea star die-off became apparent.

With colleagues at Western Washington University and the Wildlife Conservation Society, Hewson is trying to determine what organisms – bacteria, viruses, parasites – exist in healthy stars and in the sick ones.

“Initially, when you go in to study something with an unknown causative agent, you need to understand what’s naturally there. But knowledge of microbiology associated with sea stars is very limited,” Hewson said. “Once we know what’s there, we can do quantitative studies to determine whether the organisms we find are associated with disease or not.”

In an outbreak as fast and widespread as this one, communication between researchers in various disciplines and many locations is critical. Harvell and other Cornell researchers had just established such a communication system – a Research Collaboration Network (RCN) – when the sea star die-off began.

“There’s no question that the network has facilitated communication and sampling efforts between myself, other researchers and even the public on the West Coast,” Hewson said. “I think in the absence of the RCN, this would not have been coordinated as well.”

Not only is the outbreak devastating sea stars, but it is also drastically changing the ocean ecosystems the sea stars once inhabited. Two affected species – sunflower and ochre stars – are “keystone species” in their respective habitats. That is, they are species that have disproportionately large impacts on their ecosystems. The term was coined 45 years ago by one of Harvell’s former mentors, zoology professor Robert Paine, of the University of Washington, specifically to describe the importance of the ochre star in the Pacific Northwest.

“This is the species that defined the term, which is a central concept in ecological theory,” Harvell said. “We do expect the impact to be dramatic. And to take away not just one, but both of these keystone species in adjoining ecosystems? It’s going to have a big effect.”

Citizen-scientist volunteers on the West Coast are invited to download a tracking log, available at seastarwasting.org to record observations of wasting syndrome.