Speed is blinding. Just ask the tiger beetle, the fastest insect its size. Though predatory tiger beetles have excellent sight, when they chase prey, they run so fast they can no longer see where they are going.

Cornell researchers have discovered that, unlike insects that wave their “feelers” around to acquire information, tiger beetles rigidly hold their antennae directly in front of them to mechanically sense their environments and avoid obstacles while running, according to a study published online Feb. 5 in the journal Proceedings of the Royal Society B.

The findings raise questions about strategies used by other fast animals, such as birds of prey and some fish, to sense their environments when speed blinds. The research also has implications for autonomous vehicles that could use fixed antennae to detect obstacles.

“For an insect with really good vision that is active in the day time normally, you would think it would not rely on antennae for sensing its environment,” said Cole Gilbert, Cornell professor of entomology and the paper’s senior author. Daniel Zurek, a postdoctoral researcher in Gilbert’s lab, is the paper’s first author. 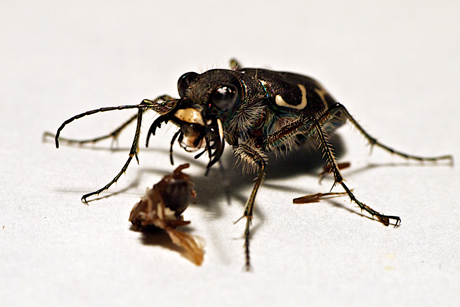 “It [the tiger beetle] has evolved important mechano-sensing behavior while running because it runs so fast,” Gilbert added.

In an earlier paper, Gilbert reported that tiger beetles run so fast, their eyes cannot capture enough light to form images of their prey. Therefore, the insects stop for just milliseconds to relocate prey, then start running again.

Gilbert and Zurek sought to learn how the running insects negotiate obstacles in their habitat, such as crevasses or grass stems, and what role their characteristically forward antennae play. To test this, the researchers set up a runway with a hurdle: In one experiment normal tiger beetles (of the species Cicindela hirticollis) ran the track and negotiated the hurdle, tilting their bodies up when their antennae touched the hurdle; in a second experiment, the researchers painted over the beetles’ eyes and found these blind beetles responded similarly. In the third test, they clipped the antennae of sighted beetles, and the insects smacked right into the hurdle.

The experiment revealed that for fast-moving tiger beetles, “eyes are not sufficient or necessary to avoid obstacles,” Gilbert said. “The antennae are held extremely rigid with the tips 1.5 millimeters off the ground, so they would potentially pick up any discontinuity in the surface.”

Gilbert questions how peregrine falcons and predatory fish compensate for blurry sight while speeding towards prey, potential research areas that no one has tested. The current study may provide a model for new questions. It’s possible, for example, that motion-blind fish perhaps employ their lateral line, sense organs found in aquatic vertebrates used to detect movement and vibration in water.

Also, autonomous vehicles could employ protruding antennae to sense their surroundings, as some of the first robots were fitted with, said Gilbert. “It would be cheaper than cameras,” he said. “For some applications, it [antennae] might be a solution, it is certainly one that worked evolutionarily for tiger beetles.”