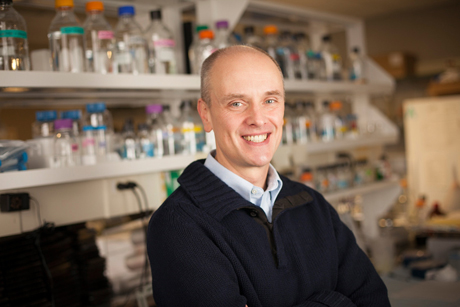 Provided
Dr. Alexander Travis led a study that found that a component of the sperm membrane tightly controls a crucial step in fertilization, making it a prime target for efforts to either assist fertilization or prevent it.

A new study headed up by Cornell scientists has found that a component of the sperm membrane tightly controls a crucial step in fertilization, making it a prime target for efforts to either assist fertilization or prevent it.

That’s good news for both fertility efforts and contraceptive development, according to lead author Dr. Alexander Travis, associate professor of reproductive biology at Cornell’s Baker Institute for Animal Health and the College of Veterinary Medicine.

He and his colleagues report in the journal Developmental Cell that as a sperm approaches an egg, GM1 in the sperm membrane controls the opening and closing of a specific calcium channel on the surface of the sperm head, allowing a small amount of calcium into the sperm. The researchers report that this tiny movement of calcium must be completed in order for the sperm to release the enzymes that help it pass through the egg’s thick outer coating. The release process, called acrosome exocytosis, is an irreversible step toward fertilization.

“By defining how GM1 regulates this calcium channel, we can now look for compounds that block or mimic that interaction,” said Travis, who also is faculty director for the environment at Cornell’s Atkinson Center for a Sustainable Future. “It potentially gives you a new approach for a spermicide,” he added.

The only spermicide that’s commercially available is detergent-based, a formulation that makes certain users more susceptible to sexually transmitted diseases. A new approach could work without detergents, he says, mimicking GM1’s effect on sperm and triggering them to burst open and die long before they reach an egg.

On the other hand, he said, the information might help guide the development of new cryopreservatives for use in fertility treatments in humans, livestock or endangered species. Some current cryopreservative formulations contain mixtures of lipids, including GM1, an ingredient that may trigger premature acrosome exocytosis and actually reduce the length of time sperm can survive after thawing, Travis said.

Meanwhile, an immediate application for GM1 is male fertility testing. Since the presence and location of GM1 in the sperm membrane must be finely tuned to accomplish fertilization, defects in these aspects can adversely affect sperm function, making GM1 a potentially useful biomarker for male fertility, said Travis. A company that Travis co-founded, Androvia Inc., has developed an assay of male fertility that’s currently in clinical trials.

The findings may also provide answers to other health-related questions, Travis added. The particular calcium channels that are active in sperm and regulated by GM1 are also found in other parts of the body, and Travis says his lab will now explore whether the GM1-calcium channel interaction they’ve identified in sperm also holds true in those organs.

The paper, “Lipid Modulation of Calcium Flux Through CaV2.3 Regulates Acrosome Exocytosis and Fertilization,” will be published Feb. 10.