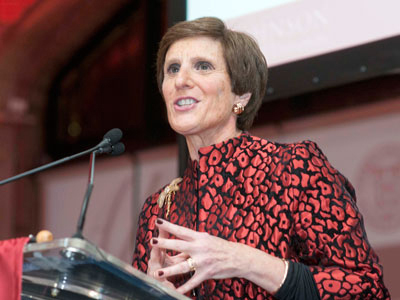 Provided
Irene Rosenfeld at the Alumni Recognition and Celebration Dinner.

After applauding Johnson Dean Soumitra Dutta, the Cornell Alumni Association and her fellow award recipients, Rosenfeld hailed her former professor, Associate Dean of Academic Affairs and Dean Emeritus L. Joseph Thomas, whom she described as having a winning combination of acumen, capability and likeability, who “was responsible for admitting me to the Ph.D. program, and has decided that he doesn’t regret it yet.”

In a nod to Broadway, Rosenfeld called her talk “Tips to the top: how to succeed in business (but you really do have to try).” Introducing her tips, she said: “As an employee, manager and CEO, I have found that these tips are valuable at any stage of one’s career and life”:

Make a difference. “In every job, resist the urge to fly below the radar; make the job better for your having been there.” Rosenfeld described her bold moves at Kraft, to which she returned in 2006 to revitalize her former employer’s sagging business. Introducing new brands and acquiring key businesses, she noticed that the company’s offerings fell into two distinct categories: established U.S. supermarket staples such as Jell-O and Oscar Mayer; and impulse-buy snack items, like Cadbury, Oreo and Trident, that were growing quickly outside the United States. She split the firm into the Kraft Foods Group and Mondelēz International, a daring move that has since generated $25 billion to $30 billion in shareholder value.

Take risks. “You can’t steal second base if you’re firmly on first,” said Rosenfeld, who counseled taking risky jobs to build skills and character, and gain exposure to senior management. She cited her acquisition of Cadbury in a multi-billion-dollar, trans-Atlantic, cash-and-stock hostile U.S. takeover of a cherished British brand, involving two public companies regulated by four agencies, that was openly criticized by business icon Warren Buffett. “It wasn’t easy, but I knew it was the right decision,” said Rosenfeld. The move resulted in $800 million in cost savings and more than $1 billion in revenue synergies – increased revenue across multiple brands – with access to high-growth markets like India, Mexico and South Africa.

Ask for what you want. “Especially for women, who are not socialized to toot their own horns, it’s important to let people know what you want, and what you’re capable of doing,” said Rosenfeld. Over dinner one night in 1996, her boss asked her what her ideal next job might be; she quickly replied that, having run two General Foods divisions, she was ready to head a freestanding business. Unknown to her, the head of Kraft Foods Canada had just resigned. Three weeks later, her boss called to ask if she wanted the job. “Saying what you want will increase the likelihood that things will play out the way you want,” she said.

Be your best self at all times. Always treat others as one would want to be treated, said Rosenfeld, who encountered an unexpected personal challenge during the Cadbury deal. “The British press took an intense interest in my personal life, as the face of the company that was trying to buy out their beloved Crème Eggs,” she said. The media dug up Rosenfeld’s old neighbors, her rabbi and even her former professor, Vithala Rao – whose worst revelation was that his former Ph.D. student had paid her research subjects only 25 cents. “By living a clean life, being ethical and being compassionate, nice guys and gals can really finish first.”

Irene Kim is a freelance writer based in New York City.