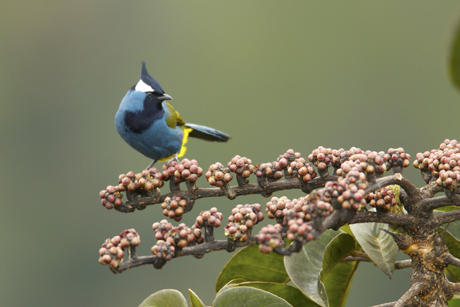 Tim Laman
The crested berrypecker has shifted its ranges up near the summit of Mt. Karimui in Papua New Guinea; predictions suggest that a warming of a further 1.8 degrees Fahrenheit will result in a localized extinction.

Many tropical mountain birds are shifting their ranges upslope to escape warming temperatures, but tropical species appear to be more sensitive to climate shifts than species from temperate regions, report Cornell Lab of Ornithology researchers Feb. 17 in the Proceedings of the National Academy of Sciences.

Climate change predictions suggest global warming will push at least four of these species into localized extinctions by the end of this century, says lead author Benjamin Freeman, a Ph.D. student at Cornell, who conducted the research with his wife, Alexandra Class Freeman, a Cornell ornithology researcher.

“Our research demonstrates that no matter where you are on earth … climate change is having tangible impacts,” Class Freeman says. “In this case, the activities of industrialized nations causing climate change are causing birds in remote New Guinea, deep in tropical mountain forests, to move up the slopes to find their preferred habitat.”

Yet, mountain birds in tropical climates are moving upslope even farther and faster than those in temperate climates, find the researchers – almost 400 feet (or as high as a 40-story skyscraper) over the last 50 years.

“[And] because a mountain is like a pyramid, there’s less area for habitat available as they move up the mountain,” Freeman says. “They’re being squeezed both by temperatures and for space.”

The researchers retraced scientist Jared Diamond’s landmark bird surveys 50 years ago in two remote forested mountains (Mt. Karimui and Karkar Island) in Papua New Guinea, which offered a baseline for measuring change. In the past 50 years, the researchers report, the annual mean temperature of the two areas has risen about 0.7 degrees Fahrenheit, and 70 percent of all species in the survey shifted their ranges upslope by an average of 370 feet on Mt. Karimui. On Karkar Island, 77 percent of all species in the survey moved upslope an average of 500 feet.

Because these mountains, which are both about 8,000 feet tall, are so remote, there has been minimal human development. Climate change is the only major environmental change that has occurred since Diamond’s historical transects.

Four bird species in the study – the white-winged robin, mountain gerygone, crested satinbird and crested berrypecker – have already shifted their ranges upward near the summit of Mt. Karimui. A further 1.8 degrees Fahrenheit increase will likely result in the localized extinction of all four species, say the authors. Temperatures in New Guinea are predicted to increase by 4.5 degrees Fahrenheit by the end of this century.

“The predicted change by the year 2100 will not only finish off four species on these mountains, but another 10 to 15 species will be put in very precarious positions,” says Freeman. “Furthermore, these upslope shifts are … [also] happening with Peruvian birds, Indonesian moths, Madagascar chameleons and probably the majority of species in tropical mountains.”

The broader trend is clear, assert the researchers: Continued temperature increases will cause extinctions of tropical birds on mountains.

This research presents strong evidence of the need for tropical mountain habitat conservation, say the authors, who point out that intact and connected contiguous forests up a mountainside provide the best conductivity for bird species moving upslope.

“We need to make sure the habitat is in place to allow birds to adapt,” says Freeman.

The research, “Rapid Upslope Shifts in New Guinean Birds Illustrate Strong Distributional Responses of Tropical Montane Species to Global Warming,” was funded by the National Science Foundation, the Athena Fund of the Cornell Lab of Ornithology and the Explorer’s Fund.

Gus Axelson is a science editor at the Cornell Lab of Ornithology.