When you were learning to ride a bicycle you thought gravity was your enemy, trying to make you fall over. But without gravity, you wouldn’t be able to steer, say Cornell engineers. To demonstrate the concept, they built a hybrid vehicle they call a “bricycle” – a cross between a bicycle and a tricycle – that demonstrates what it would be like to ride a bike in zero-G. (Assume you have magnetic wheels to keep you on the floor.)

Their observations may be important to people designing devices to help rehabilitate people with injuries and to the makers of so-called “narrow track vehicles” like the Nissan Land Glider, intended to reduce traffic congestion.

“What our research shows is that you’ve got to be careful,” said Andy Ruina, professor of mechanical and aerospace engineering. “But I’m sure the people designing these things have made this discovery one way or the other.” Ruina described the bricyle at the annual meeting of the American Physical Society March 5 in Denver. You can watch riders struggling to steer the bricycle on YouTube. 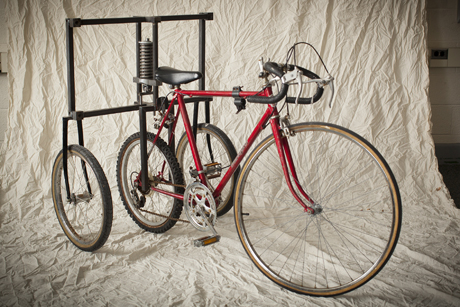 As Ruina explains it, a bicyclist starts a turn to the left by “countersteering” to the right – briefly turning the wheel away from the intended turn. That makes the bike start to fall left, in the direction of the intended turn. To prevent falling the rider then steers left, but not enough to fully regain upright balance. The rider is then in a steady turn to the left, with gravity trying to pull the rider to the left and centrifugal force pulling up to the right. To end the turn, the rider turns even more to the left, bringing the wheels back underneath. The rider isn’t thinking about the physics consciously, just doing it.

“We are much smarter from the ears down,” Ruina said. “Really the rider has essentially no direct control of leaning, on a bike or a bricycle. The leaning is a consequence of the steering. So any leaning the rider intends is accomplished by doing the right sequence of steering maneuvers.”

You can think of a tricycle as a bicycle with large training wheels. In a turn, the outside rear wheel keeps the vehicle from tipping, so the rider doesn’t have to lean. 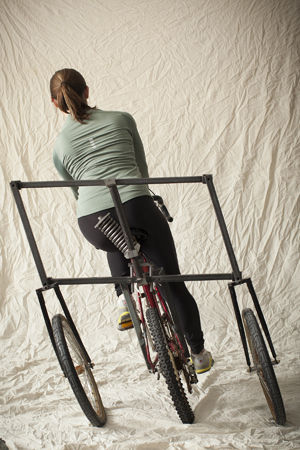 But what happens halfway between?

Ruina’s research team set out to explore the “hand of God” approach to learning: help the learner along at first, then gradually withdraw help as the learner becomes more skilled – like your Dad holding you up as you learned to ride a two-wheeler. For adult learners, like people undergoing rehabilitation, how about a bike with adjustable training wheels that could be made gradually looser?

The bricycle has two outboard rear wheels the same size as the center rear wheel, and all three wheels are connected to the frame by a spring whose tension can be adjusted. When the spring is loose, the vehicle behaves like a bicycle: The rider leans to maintain balance in a turn. Clamp the spring tight and the vehicle is a tricycle: The outside wheel keeps it from tipping. Maybe, by gradually loosening the spring, you could help the rider learn to balance.

“It can be used for training balance, but not steering,” Ruina said. It turns out that as the spring is made looser, there is a point where the restoring force of the outside wheels exactly equals the gravitational pull on the leaning rider. Trying to turn right causes an ever-growing lean to the left. The rider doesn’t want to fall and steers back to straight ahead to regain balance. You can balance but not steer, or steer and lose balance. So, the researchers concluded, “The bricycle cannot be used to transfer riding skills from a tricycle to a bicycle.” The difference, they said, “cannot be met halfway.”

Something similar may happen with narrow-track vehicles, which look sort of like enclosed motorcycles with three or four wheels. Their wheelbase is so narrow that they can’t turn without tipping over, so they lean to the inside in a turn, like a bike. If the wheels are spring-loaded, Ruina said, the same steering instability could occur.

Ruina has extensively studied the mechanics of human movement, especially locomotion, with applications in medicine and robotics. His work is supported by the National Science Foundation.

Researchers explain why bicycles balance themselves