“I didn’t want to limit it to the most famous female Cornellians,” said Gilman, the exhibit curator. “By including professors, deans, program leaders and staff who students see on campus every day and recognize as leaders, it sends a powerful message about their impact as well.”

Gilman, a January graduate with a degree in human biology, health and society from the College of Human Ecology, was stirred to action while studying on campus. During a break, she observed that all of the room’s portraits depicted influential men, a troubling trend she confirmed at other campus locations.

“With so few portraits of women, it sends a message that only men are powerful and important in society,” said Gilman. “Women are literally left out of the picture.”

Encouraged by faculty and administrative mentors, Gilman started a #showmethewomen social media campaign to solicit nominations for an exhibit. Thanks to her networks built as president of Cornell Hillel, Risley Hall residential adviser and a Cornell Multifaith Ambassador, hundreds of ideas poured in on Twitter, Facebook and Instagram. 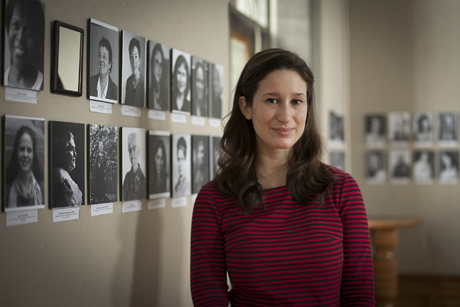 Jason Koski/University Photography
Jordana Gilman '14 with her exhibit "Women in the Big Picture" in Willard Straight Hall. The photos will be on display through April 1.

Lacking the resources to create formal portraits, Gilman opted to print and mount 5x7s of these notable women, going against some friends’ advice to hold off until she could raise funds for more polished pictures.

“People told me to slow down, to get everything just perfect, but I felt that would just become another excuse to not take action,” Gilman said. “Women have been hearing for years that it’s only a matter of time before we’re recognized. If we wait for that day to come maybe it never will.”

The exhibit, on display through April 1, opened last month at a well-attended reception; in the crowd were 10 of the 250 featured women, including Kay Obendorf, M.S. ’74, Ph.D. ’76, professor of fiber science and apparel design and senior associate dean for the College of Human Ecology.

“The collection honors the rich history and current contributions of a large number of Cornell women and inspires the entire Cornell community,” said Obendorf, who encouraged Gilman to pursue the idea.

Among those moved by the photos was Sandra Fluke ’03, a women’s rights advocate who toured the exhibit while attending the annual meeting of the President’s Council of Cornell Women. Gilman, a champion for many of the same causes Fluke once rallied for on Ho Plaza, was “deeply thrilled” to share it with her.

Cornell Vice President for Student and Academic Services Susan Murphy ’73, Ph.D. ’94, whose photo is included, visited the gallery recently. She praised Gilman’s “clear and strong values” and “determination to bring the project to life.”

Perhaps most powerful, Gilman said, is a mirror that hangs amid the rows of photographs. By seeing their faces among the rest, visitors consider their place in Cornell history and imagine how they’ll shape the university’s future. Gilman, for one, aims to make a difference: This fall she will attend SUNY Upstate Medical University, and she plans to become a physician committed to women’s health issues.

“It puts viewers in the picture, both women and men,” she said. “They are inspired to think about their impact and what they’ll do to get their portrait hung on campus.”