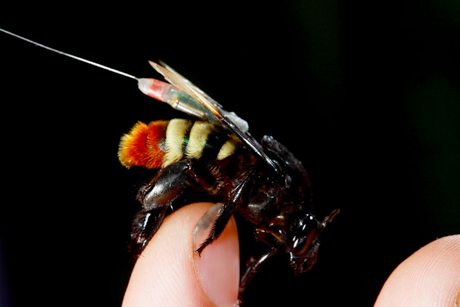 Christian Ziegler
An orchid bee fitted with a radio tracker.

During Pleistocene era climate changes, neotropical orchid bees that relied on year-round warm, wet weather found their habitats reduced by 30 to 50 percent, according to a Cornell study that used computer models and genetic data to understand bee distributions during past climate changes.

In previous studies, researchers have tracked male and female orchid bees and found that while females stay near their nests, male orchid bees travel, with one study concluding they roam as far as 7 kilometers per day. These past findings, corroborated by genetic data in the current study, reveal that males are more mobile than females.

“The dataset tells us that if the tendency [in the future] is to have lower precipitation, in combination with deforestation, the suitable habitat for the bees is going to be reduced,” said Margarita López-Uribe, the paper’s first author and a graduate student in the lab of Bryan Danforth, Cornell professor of entomology and co-author of the study.

The good news is that since male orchid bees habitually travel far, they can keep bee populations connected and healthy.

“The males are mediating genetic exchange among populations, maintaining connectivity in spite of fragmentation of habitats,” said López-Uribe. “This is a possible mechanism bees could use to ameliorate the negative impacts of population isolation resulting from future climate changes and deforestation,” she added.

By looking at current climate and bee distributions, López-Uribe and colleagues assessed parameters of climate conditions that each of three bee species within the genus Eulaema could tolerate physiologically, including temperature and precipitation variability. She found that one of the three species, Eulaema cingulata, was three times more tolerant to a variety of climatic conditions.

By proceeding with the caveat that physiological tolerance has remained constant – species tend to be evolutionarily conservative about shifting their niches – the researchers used computer models to simulate past bee distributions based on climate conditions in the Pleistocene. The results showed that in the past, during periods when the neotropics had lowered precipitation, each species experienced significant reduction in suitable habitat, with E. cingulata maintaining the largest geographical ranges.

Climate and ecological niche computer model simulations were closely matched by genetic data of the two less tolerant orchid bee species. The genetic data included mitochondrial markers, which are only inherited from females, and nuclear markers, which come from males and females. The mitochondrial DNA showed that individual bees in one geographic area were more closely related to each other than to bees from other areas. The findings suggest the maternal lines of these bees remained in the area and shared the same pools of DNA over time. But the bi-parental nuclear DNA showed more variation between individuals within an area, offering evidence that males traveled and shared their DNA with other regional groups.

Orchid bees live in the neotropics, an ecozone that includes part of South and Central America, the Mexican lowlands and the Caribbean islands. They are one of the most important pollinators, visiting many types of plants, including some 700 species of orchids that are exclusively pollinated by these bees.

Co-authors include Kelly Zamudio, Cornell professor of ecology and evolutionary biology, and Carolina Cardoso, a researcher at the Universidade Federal de Minas Gerais in Brazil.