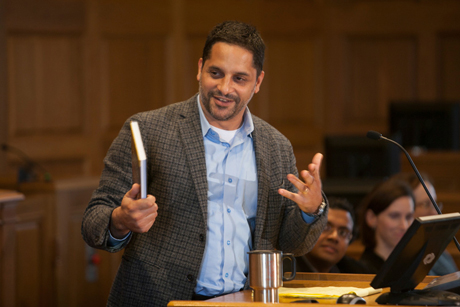 University Photography
In this 2012 file photo, Eduardo Peñalver speaks at a celebration at Cornell Law School for the publication of his and Gregory Alexander's book "An Introduction to Property Theory."

Eduardo M. Peñalver ’94, an expert in property law and land use, and Cornell faculty member from 2006 to 2012, has been named the next Allan R. Tessler Dean of Cornell Law School. Currently the John P. Wilson Professor of Law at the University of Chicago Law School, Peñalver will become dean July 1, making him the first Latino dean of an Ivy League law school.

Peñalver succeeds Stewart J. Schwab, who has been dean since 2004. Schwab, a faculty member since 1983, plans to return to teaching at the Law School after a sabbatical in the 2014-15 term.

“Eduardo’s extraordinary academic pedigree, deep love for Cornell, personal warmth and engaging vision make him ideally suited to build upon the excellent work of Dean Schwab and to further advance the pre-eminence of the Law School,” said Provost Kent Fuchs.

“I am excited and honored to return home to Cornell Law School as its next dean. My most formative intellectual experiences have been at Cornell, both as an undergraduate and, more recently, as a member of the law school faculty,” said Peñalver. “Cornell Law School is a remarkable community of scholars and students. It is diverse, intellectually rigorous and exceptionally collegial, and I look forward to working with our faculty, students, staff, alumni and the university leadership to guide the law school into the future.”

Peñalver, who received his B.A. from Cornell’s College of Arts and Sciences in 1994 and his law degree from Yale Law School in 1999, joined the Cornell faculty in 2006 and the Chicago faculty in 2013. He taught at Fordham Law School from 2003 to 2006 and has been a visiting professor at Harvard and Yale law schools.

Upon completing law school, he clerked for Judge Guido Calabresi of the United States Court of Appeals for the Second Circuit and for Supreme Court Justice John Paul Stevens. Between college and law school, Peñalver studied philosophy and theology as a Rhodes scholar at the University of Oxford.

Praised by colleagues as an important, passionate and brilliant scholar, Peñalver has had his work on property law published in scholarly law journals at Yale University, the University of Michigan, Cornell and the University of Pennsylvania. He is considered to be a leading voice in the “progressive property” movement. His research explores how property law creates or reinforces communal bonds and how property rights mediate the relationship between individuals and communities.

Peñalver’s book “Property Outlaws” (co-authored with Sonia Katyal), published by Yale University Press in 2010, explores the role of disobedience in the evolution of property law. His most recent book, “An Introduction to Property Theory” (co-authored with Gregory Alexander), was published by Cambridge University Press in 2011.

Described as an eloquent, engaging and provocative instructor, Peñalver has taught courses on land use, law and religion, property law, and theories of property, among others. In addition, he has delivered more than 60 academic presentations all over the world.

From 2009 to 2011, Peñalver was director of faculty research at the Law School. From 2007 to 2010, he was faculty adviser to the Cornell Law Review. In 2010, Peñalver received the Provost’s Award for Distinguished Scholarship.

Peñalver and his wife, Sital Kalantry ’94, met as undergraduates at Cornell. She will be returning to the law school as a clinical professor; currently Kalantry is a clinical professor at the University of Chicago Law School and founder and director of its International Human Rights Clinic. Together they have two children.

Chris Brouwer is a writer at Cornell Law School.