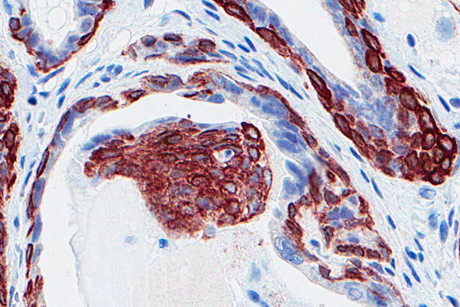 The study is published in the journal Cell Reports, March 13.

Previous research at Cornell and elsewhere has shown that another gene, called p53, acts to positively regulate miR-34. Mutations of p53 have been implicated in half of all cancers. Interestingly, miR-34 is also frequently silenced by mechanisms other than p53 in many cancers, including those with p53 mutations.

The researchers showed in mice how interplay between genes p53 and miR-34 jointly inhibits another cancer-causing gene called MET. In absence of p53 and miR-34, MET overexpresses a receptor protein and promotes unregulated cell growth and metastasis.

This is the first time this mechanism has been proven in a mouse model, said Alexander Nikitin, a professor of pathology in Cornell’s Department of Biomedical Sciences and the paper’s senior author. Chieh-Yang Cheng, a graduate student in Nikitin’s lab, is the paper’s first author.

In a 2011 Proceedings of the National Academy of Sciences paper, Nikitin and colleagues showed that p53 and miR-34 jointly regulate MET in cell culture but it remained unknown if the same mechanism works in a mouse model of cancer  (a special strain of mice used to study human disease).

The findings suggest that drug therapies that target and suppress MET could be especially successful in cancers where both p53 and miR-34 are deficient.

The researchers used mice bred to develop prostate cancer, then inactivated the p53 gene by itself, or miR-34 by itself, or both together, but only in epithelium tissue of the prostate, as global silencing of these genes may have produced misleading results.

When miR-34 genes alone were silenced in the mice, the mice developed cancer free. When p53 was silenced by itself, there were signs of precancerous lesions early in development, but no cancer by 15 months of age. When miR-34 and p53 genes were both silenced together, the researchers observed full prostate cancer in the mice.

The findings revealed that “miR-34 can be a tumor-suppressor gene, but it has to work together with p53,” Nikitin said.

In mice that had both miR-34 and p53 silenced concurrently, cancerous lesions formed in a proximal part of the prostrate ducts, in a compartment known to contain prostate stem cells. The early lesions that developed when p53 was silenced alone occurred in a distal part of the ducts, away from the compartment where the stem cell pool is located. This suggested there was another mechanism involved when p53 and miR-34 were jointly silenced.

Also, the number of stem cells in mice with both p53 and miR-34 silenced increased substantially compared with control mice or mice with only miR-34 or p53 independently silenced.

“These results indicated that together [miR-34 and p53] regulate the prostate stem cell compartments,” said Nikitin.

This is significant, as cancer frequently develops when stem cells become unregulated and grow uncontrollably, he said.

Researchers further found that p53 and miR-34 affect stem cell growth by regulating MET expression. In absence of p53 and miR-34, MET is overexpressed, which leads to uncontrolled growth of prostate stem cells and high levels of cancer in these mice.

Future work will further examine the role of p53/miR-34/MET genes in stem cell growth and cancer. The findings have implications for many types of cancer.