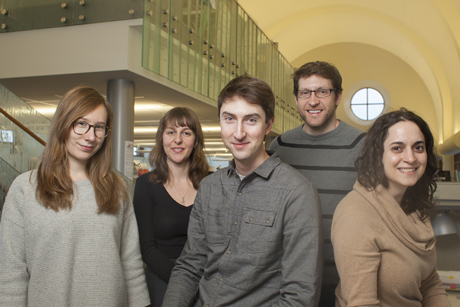 Provided
In lieu of sunken Vine Street Expressway, Philadelphia's center is transformed into a tree-lined, multi-modal transportation system, thanks to Cornell's team IndePennDense 2076. 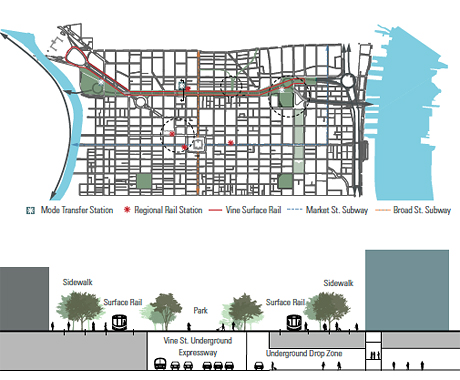 A quintet of Cornell students examined Philadelphia’s Center City to disentangle traffic and create a sustainable, sociable economy for the city decades into the future. During the 2014 Ed Bacon Student Design Competition, the students declared their team “IndePennDense 2076” and won first place.

The competition urged student teams to develop ideas on how driverless cars could shape Philadelphia’s future. The students – Scott Baker, Kate Benisek, Ruslan Filipau, Andrea Haynes and Ashley Pelletier, all graduate students in the field of landscape architecture – scrutinized Philadelphia’s Vine Street Expressway (Interstate 676). The sunken thoroughfare connecting I-95 in the east and I-76 was built in 1964 and is surrounded by haphazard development, decaying buildings and rundown residential areas. Effectively, it splits Philadelphia into north and south.

“Interstate 676 cuts off the rest of the city, and it’s a barrier to the city growing.  North of 676, everything dies. … We live in a car-dominant society, and we, as a team, didn’t want to design just for the car,” said Haynes. “We articulated a corridor that’s a public space that accommodates the flow of cars, buses, trains, pedestrians, and it still remains a major connector.”

Autonomous vehicles – and that’s most of the vehicles – will belong to a wireless network that coordinates routes and reduces congestion. People may summon these autonomous cars, or passengers can request autonomous buses on demand. The vehicles are fully electric – with plug-less charging.

Yet even if the students’ idea becomes reality, change in Philadelphia’s Vine Street Expressway corridor will not happen overnight. The students envision four phases in 60 years for their contest project – with everything in place by 2076, the United States’ Tricentennial.

Said Benisek: “Our idea is to bring people back to the center of Philadelphia.”