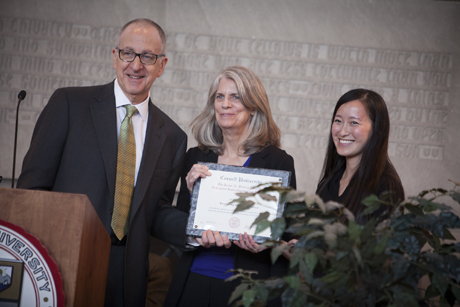 The 20th annual James A. Perkins Prize for Interracial Understanding and Harmony was presented March 11 at Willard Straight Hall to IDP. Honorable mentions were given to the Know the Power of Your Words Campaign and to the radio show, Talk of the Town.

The $5,000 prize recognizes the Cornell student, faculty, staff member or program making the most significant contribution to furthering the ideal of university community while respecting the values of racial diversity.

IDP is a course that has been offered each semester since fall 2012. It provides a setting for students to engage in frank, constructive discussions about such issues as race and ethnicity, socio-economic status, gender, religion and sexual orientation so that students can learn from each other and learn to work through conflicts. So far, 207 undergraduates – of which 108 have been students of color – have participated in the course. Students are assigned to small discussion groups with equal numbers of white students and students of color, to discuss assigned readings and participate in class exercises.

Enrollment in the course has grown 450 percent over the past four semesters. The group’s application noted that many participating students have gone on to facilitate for IDP and to work with other campus groups to further develop alliances to fight for social justice.

The Know the Power of Your Words Campaign, which was launched in April 2013, seeks “to raise awareness about the profound effect that hurtful language can have on our peers, neighbors and community,” said their application. In the past year, the campaign reached about 200 students via two student panel discussions and keynote addresses. Their discussions have evolved into conservations of how community members “can build each other up with positive language, rather than tear each other down with the use of hurtful language.”

“Talk of the Town,” a weekly, hourlong radio talk show on WVBR 93.5 FM, serves as a platform for community members to express opinions on social, racial, political and cultural issues. Hosted by Juliana Garcia ’14, the show seeks “to transcend the boundaries of inequality, cultural differences, political polarity and much more by presenting listeners with diverse guests and topics every week,” she says. In its 27 shows so far, says Garcia, 14 of her 36 guests focused on promoting interracial understanding and harmony.