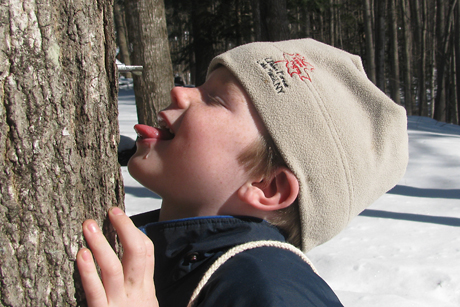 Provided
Mike Farrell, a Cornell maple tree specialist and director of the Uihlein Forest in the Adirondacks, has introduced his family members to maple water. Here, Farrell's nephew, Andrew, enjoys the naturally sweetened beverage straight from the source.

It is being touted as one of nature’s best-kept secrets and a sweet opportunity to tap the potential of New York’s extensive forest network – it’s maple water.

Produced by nature, bottled by Feronia Forests and aided in several ways by Cornell, the new product, Vertical Water, is being rolling out nationwide in stores beginning in April.

As temperatures warm and maple sap starts flowing, gallons of it are collected and boiled down to make syrup. But the subtly sweet watery sap also tastes great straight from the tree, said Michael Farrell, director of Cornell’s Uihlein Forest in Lake Placid and author of a recently released comprehensive maple guide, “The Sugarmaker’s Companion.”

Maple enthusiasts are invited to sample another sweet treat this season: walnut syrup.

The product will be featured at Arnot Forest in Van Etten March 22-23, as part of a statewide series of Maple Weekend events.

For the past two years, researchers at Cornell’s Uihlein Forest in Lake Placid have been experimenting with tapping black walnut and butternut trees for syrup production and sharing the finished product with visitors.

A recent grant from the Toward Sustainability Foundation will allow researchers to expand the project, tapping 70 trees in Cornell forests, and an additional 100 on collaborator land near Syracuse. They will test the timing of sap flow and potential yield from different collection systems, as well as consumer preferences and market potential.

Uihlein Forest director Michael Farrell said the most promising opportunity might be a blended syrup.

“Maple-walnut is a popular flavor in the Northeast, and New York sugar makers can be at the forefront in developing this new market opportunity that could add tremendous value to existing sugaring operations,” Farrell said.

And nutritious, Farrell added. Maple sap is water that is filtered as it travels vertically up from the soil, through the roots and up the tree trunk, gathering a small amount of sugar and minerals along the way. “The minerals occurring in highest concentrations include calcium, potassium and magnesium, and [the sap] is also an excellent source of manganese,” Farrell noted.

Paolo Cugnasca, managing director of Feronia Forests, approached Farrell a few years ago for advice on novel approaches to gaining income from forestland without having to cut down trees. Farrell suggested bottling maple sap. The challenge, however, was that sap is only available for a short time every spring and spoils quickly. So Farrell directed Cugnasca to Cornell’s Food Venture Center at the New York State Agricultural Experiment Station in Geneva, where Feronia was able to test and perfect a process to extend the sap’s shelf life to at least one year.

“We never could have done any of this without Cornell,” Cugnasca said.

If the popularity of coconut water is any indication, there could be a big market for an all-natural product that is mostly water with a bit of sweetness and minerals, Farrell said. In taste tests conducted at Cornell’s sensory laboratory, participants preferred maple water to coconut water, he added.

The success of the product would be a big boon to the state’s maple producers and forest owners, Farrell said. Cugnasca is now working with members of the New York Maple Producers Association near its western New York bottling plant to supply sap for the first batches of Vertical Water.

“With only 1 percent of the maple trees in New York currently being tapped, that’s amazing untapped potential,” Cugnasca said.

Ellen Mitchell is a freelance writer in Geneva, N.Y.