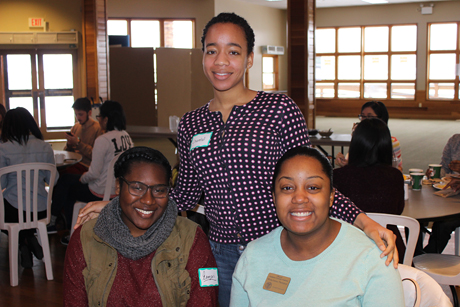 More than 50 Cornell students, faculty and staff gathered Feb. 14-16 in Honesdale, Pa., for a Posse Foundation retreat titled “Movements in the 21st Century: Are They Needed?”

Posse is a national college access and youth leadership program that identifies promising high school students from inner-city public schools who might not otherwise apply to top-tier colleges and universities. Students attend college in multicultural cohorts of 10 from the same city, and the program has a 90 percent graduation rate.

“The overarching philosophy of Posse is to change the face of the world by changing the face of leadership,” said Linda Nicholson, professor of molecular biology and genetics and Posse faculty mentor. “The foundation of change is education.”

The College of Arts and Sciences, which administers the Posse program at Cornell, sponsored the retreat so it would be free of charge to participants. All-day sessions and activities focused on various aspects of social justice, looking at historical and contemporary issues. Cornell’s Posse cohort served as leaders in collaboration with Posse Foundation staff.

According to A.T. Miller, Cornell’s associate vice provost for academic diversity, the most important aspect of the retreat was strengthening community. “By sharing the kind of issues that folks tend to keep to themselves and discovering that they were not alone in their feelings and reactions, they now can really support each other.”

The first two days of the retreat were spent talking about how to fight for others and how to effect change, said Olivia Davis ’15, an ILR student. “But when we had to talk about how we’d had to fight for ourselves it evoked a lot of emotions from a lot of people, including myself. It was such a beautiful thing that we were able to come together and share stories and cry together and laugh together and move on from that. It was really powerful.”

Julia Montejo ’17, an Arts and Sciences freshman in the Research Scholars Program sponsored by the Office of Academic Diversity Initiatives, said the retreat was a “combination of call to action and personal take-away.” She said it helped her realize that to be a role model or to work for change “it’s important to work on yourself and develop yourself to have the strength to take action.” She hopes to help create at Cornell the kind of safe space she experienced at the retreat, where people can develop themselves through sharing experiences.

Davis said the retreat participants have stayed in touch through a Facebook group; students are using social media to share ideas and support each other.

“Before the retreat, I felt as though I was alone in my struggle,” said Shamail Shahid ’15, a biology and society major in the College of Agriculture and Life Sciences. “Being surrounded by so many amazing students and staff helped me step out of my comfort zone and allow myself to open up … After the retreat I can finally say that I am not alone – that there is a wonderful network of people with whom I can relate and who are there for me.”