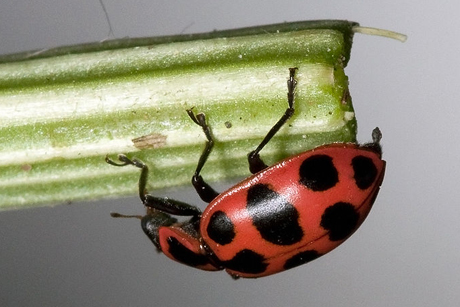 Cornell research shows that the combination of natural enemies, such as ladybeetles, with Bt crops delays a pest’s ability to evolve resistance to these insecticidal proteins.

“This is the first demonstrated example of a predator being able to delay the evolution of resistance in an insect pest to a Bt crop,” said Anthony Shelton, a professor of entomology at Cornell University's New York State Agricultural Experiment Station in Geneva, N.Y., and a co-author of the paper. Xiaoxia Liu, a visiting scientist from China Agricultural University who worked in the Shelton lab, is the lead author on the paper published March 3 in the journal PLoS One.

Bt is a soil bacterium that produces proteins that are toxic to some species of caterpillars and beetles when they are ingested, but have been proven safe to humans and many natural enemies, including predaceous ladybirds. Bt genes have been engineered into a variety of crops to control insect pests.

Since farmers began planting Bt crops in 1996 with 70 million hectares planted in the United States in 2012, there have been only three clear-cut cases in agriculture of resistance in caterpillars, and one in a beetle. “Resistance to Bt crops is surprisingly uncommon,” said Shelton.

To delay or prevent insect pests from evolving resistance to Bt crops, the U.S. Environmental Protection Agency promotes the use of multiple Bt genes in plants and the practice of growing refuges of non-Bt plants that serve as a reservoir for insects with Bt susceptible genes.

“Our paper argues there is another factor involved: the conservation of natural enemies of the pest species,” said Shelton. These predators can reduce the number of potentially resistant individuals in a pest population and delay evolution of resistance to Bt.

In the study, the researchers set up large cages in a greenhouse. Each cage contained Bt broccoli and refuges of non-Bt broccoli. They studied populations of diamondback moth (Plutella xylostella) larvae, a pest of broccoli, and their natural enemies, ladybird beetles (Coleomegilla maculata), for six generations.

The results showed that diamondback moth populations were reduced in the treatment containing ladybird beetles and unsprayed non-Bt refuge plants. Also, resistance to Bt plants evolved significantly slower in this treatment. In contrast, Bt plants with no refuge were completely defoliated in treatments without ladybirds after only four to five generations, showing rapid development of resistance in the pests. In the treatment with sprayed non-Bt refuge plants and predators, diamondback moth populations were reduced, but the larvae more quickly evolved resistance to the Bt plants.

Co-authors include Elizabeth Earle, Cornell professor emeritus of plant breeding and genetics, who developed the Bt broccoli; Richard Roush, a researcher at the University of Melbourne, Australia, and former Cornell entomologist from 1987 to 1995; and David Onstad, Ph.D. ’85, a senior research scientist at DuPont.

The study was funded by U.S. Department of Agriculture and the Special Research Projects for Developing Transgenic Plants in China.