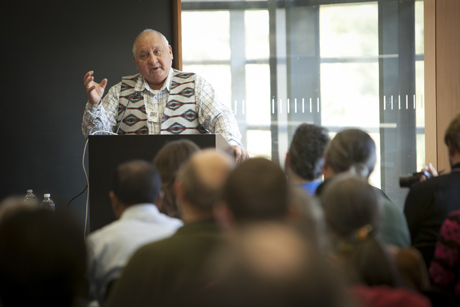 Jason Koski/University Photography
Mohawk Elder Tom Porter speaks at a symposium on Haudenosaunee views of the "Tree of Peace" at the Cornell Plantations Nevin Welcome Center. 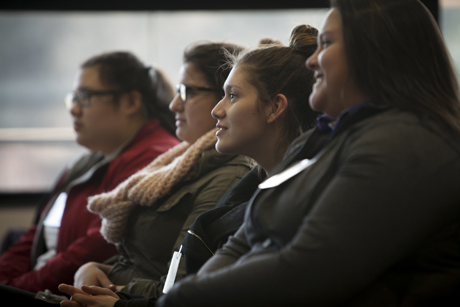 Starting a new springtime tradition, Native American leaders at Cornell planted the seeds of peace and sought to cultivate a new crop of student recruits March 21-22 at the inaugural Promising Futures event, which introduced more than 60 Native American high school students from across the United States to Cornell.

Porter immediately invited the standing-room-only crowd to count from one to 10 in the Mohawk native language, noting that the word for each number has symbolic significance in the Haudenosaunee Mohawk creation story. For instance, the word for three – Ahsen – is similar to the word for middle, representing the middle of the giant turtle where the mother of the Earth first settled after crossing over from the sky world.

Porter said it was an example of the clever ways his people hid some of their heritage to protect and preserve their identity, and he encouraged the audience to look to the past, live in the present and think of the future.

“We always say that the decisions we make today will affect the seven generations of our grandchildren,” Porter said.

A subsequent panel discussion featuring faculty affiliated with the American Indian Program focused on the symbolism of peace in the great white pine tree. Afterward, many attendees viewed a sculpture of the Ganradaisgowa’h Peace Tree by Cayuga artist Samuel Thomas; a living tree will be planted at another ceremony July 12.

Prospective students also got a flavor of what it would be like to attend Cornell. Some stayed at Akwe:kon, the AIP’s residence hall and community center. They toured campus and areas of Ithaca and attended social and informational sessions about topics like admissions and financial aid.

“No matter what your interests or goals in life, you will find a way to pursue them at Cornell,” said Kathryn J. Boor, the Ronald P. Lynch Dean of the College of Agriculture and Life Sciences, in welcoming the group.

At a peer-to-peer discussion March 22, current students addressed such topics as transitioning to Cornell, why students chose Cornell, community and preparatory tests questions.

“I came from top of the class [in high school],” said one panelist. “When I came here, I didn’t have the study skills. You’re thrown in the river, and you’re going to be expected to learn how to swim.”

In addressing his transition to Cornell from his native reservation, another said: “AIP was here for me. I had to reach out to them to create a support system for myself. I discovered that I did have family here that I didn’t even know about. It took me a while to transition.”

On the role of test taking in the admissions process, a panelist noted that the SAT and ACT can be formidable. “Why did I do so badly on the SAT and not on the ACT?” he said. “Because they’re different. What I want to tell you today is pick the right test. It can make a big difference for you.”

Fred Blaisdell ’16, a Ronald E. McNair scholar, led the discussion, which was the final session before Cornell President David Skorton addressed the audience. The event was funded in part by a grant from the CALS diversity initiative to assist efforts in recruiting Native American students within the Haudenosaunee communities in New York state.

Stacey Shackford is a staff writer for the College of Agriculture and Life Sciences; Scott Goldberg ‘16 is a writer intern for the Cornell Chronicle.