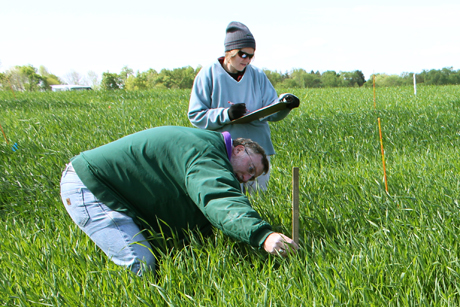 A drought two years ago left dairy farmers with a feed shortage and a lingering question: Can the off-season generate a second harvest? Results from a large collaborative project led by the Cornell Nutrient Management Spear Program (NMSP) shows that it can, and ongoing work will refine nitrogen fertilization guidelines to ensure optimal crop production with reduced risk of soil loss and nitrogen leaching.

NMSP director Quirine Ketterings, professor of nutrient management in the Department of Animal Science, presented the study’s results at the North Country Crop Congress, held at the Miner Institute Feb. 18-19 in Chazy, N.Y.

“The drought pushed farmers to consider how to produce more per acre, so they can reduce feed imports,” Ketterings said. “Many more farmers now grow a cover crop over the winter, but there are several possibilities for winter forage crops as double crops, including cereal rye, wheat and triticale. Such a double crop rotation also has the added benefit of winter cover of the soil, reducing erosion and enhancing nutrient management and soil health.”

“In about three weeks in the spring, the winter cereals put on the bulk of their biomass,” Ketterings said. “The results to date showed that one-third of the plots needed no nitrogen at all, and the rest performed best at a rate of 75 to 100 pounds of nitrogen per acre.”

It’s not unusual for nitrogen needs to vary widely from farm to farm, and even field to field, Ketterings said. It depends on soil fertility and organic matter levels, what was grown in the field in the past and whether manure was applied. The next steps include trying to determine how to predict when no nitrogen is required, as well as the economics of the double cropping system and impact of forage management.

According to Ketterings, the farmer favorite across the state was triticale, which is more forgiving with its harvest window. Ketterings cautioned that one of the challenges in the two-crop system is that it pushes back the time for corn planting in the spring, so rotations might need to be adjusted to include shorter season corn or other crops.

Over the past decade, the program has helped achieve drastic reductions of phosphorus use and improved phosphorus balances, thus contributing to reductions in phosphorus runoff and to revised state policies for managing nutrients, Ketterings said.

Current projects supported by grants from the U.S. Department of Agriculture Hatch program at the Cornell University Agricultural Experiment Station, the New York Farm Viability Institute and the Northern New York Agriculture Development Program include research on liquid manure application methods and rates, and a new project on the use of infrared “smart sensors” that tailor the amount of nitrogen applied precisely to the variable needs of plants along a row.