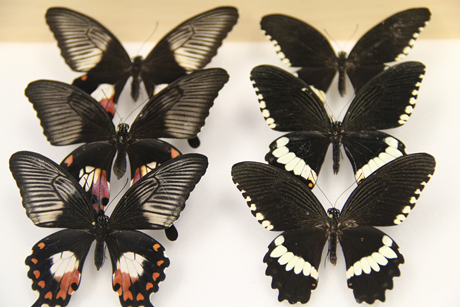 Female swallowtail butterflies in the genus Papilio are known for sexual dimorphism, traits that make males and females different, and for Batesian mimicry, the ability to evolve wing colors and shapes that mimic a poisonous relative so they don’t get preyed upon. But these adaptations are only found in females of some populations.

A study published online March 5 in the journal Nature reports that variations of a single supergene called “doublesex” – and not a tightly linked cluster of genes as previously thought – control the mimicry in common mormon (Papilio polytes) butterflies. This single gene, the researchers report, can switch the entire wing pattern, but it may require many tightly linked mutations.

“To be mimetic, swallowtail butterflies need to switch many things at the same time,” said Arnaud Martin, a postdoctoral researcher in the lab of Robert Reed, a Cornell associate professor of ecology and evolution, both of whom are co-authors on the paper.

The researchers found that swallowtails that mimic the appearance of a toxic relative – such as the poisonous common rose (Pachliopta aristolochiae) – carry an allele, or a variation of the doublesex gene. Birds learn to avoid hunting prey that resembles the distasteful  butterfly. As a result, females with the mimetic allele and wing patterns have a higher chance to survive and pass the allele on to their offspring. But if switching each characteristic – such as wing shape or wing colors – required many different genes, the process of transforming wings would result in many incomplete disguises that would not fool predators.

“Elucidating how butterflies can switch costumes during evolution helps us to understand how genetic tinkering generates adaptive changes,” said Martin.

Reed’s and Martin’s role in the study was to validate that the expression of the doublesex gene in butterflies corresponded to the mimetic patterns. The researchers used molecular and genetic analyses. “We found that the gene was expressed in the developing wings to trigger the formation of mimetic color patterns,” Martin said.

The study, “Doublesex is a Mimicry Supergene,” was funded by the National Science Foundation.