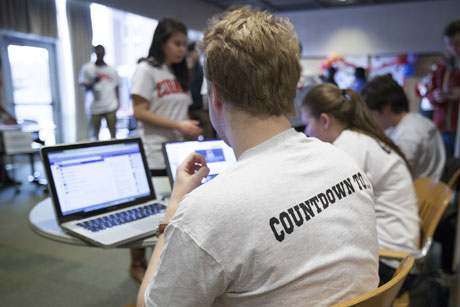 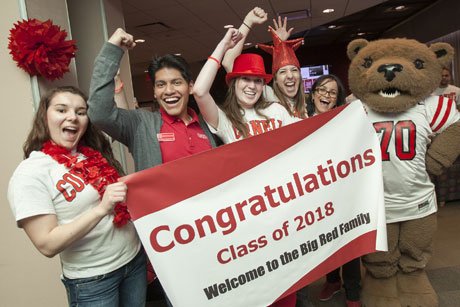 Robert Barker/University Photography
Students celebrate the Class of 2018 at the "Countdown to Cornell" event on North Campus.

At “Countdown to Cornell,” a celebratory event to congratulate newly admitted students, current Cornell students tweeted photos of themselves with Cornell-themed props, the Big Red Bear and a cutout of President David Skorton. The event, held March 27 on North Campus, marked the release of regular decisions admissions for the Class of 2018.

“We're celebrating the newly admitted students, and we want our current students to be excited about April's Cornell Days and Diversity Hosting," said Angela Herrera '03, coordinator of multicultural recruitment and the Diversity Hosting program.

Participating current students received free Cornell T-shirts to spread the festive vibe. They were encouraged to share photographs of the event on social media sites with the hashtag #CountdownToCornell and to share their own acceptance experiences with #MyCornellMoment.

“I can remember my excitement when I got my decision letter. I just want to share that excitement with other people now that they got accepted,” said Chantal Van Putten ’16.

The event began at 4:30 p.m., 30 minutes before admission decisions were released, with a performance by the Big Red Pep Band followed by a dance performance by Sabor Latino Dance Ensemble, popcorn and cotton candy.

“I’m really excited about the new class of Cornellians. I want to welcome them with some style and flair and dancing and great food,” said Jazlin Marie Gomez ’16, a member of Sabor.

When decisions were released at 5 p.m., accepted students tweeted their reactions. The tweets were projected live on a screen at the event. “Accepted to Cornell class of 2018 is this real life?” tweeted KG Norris. “Opening my acceptance letter and breaking out in tears! My grandmother and I cried and shouted in the kitchen for 10 mins,” tweeted Queen.

Current Cornell students also shared their excitement at the event and on Twitter. “I am a senior and have been at Cornell for four years. I think as I leave Cornell, I know that I had a role in welcoming the Class of 2018 and that I’ll be leaving Cornell in good hands with this future class,” said Annalise Schoonmaker ’14, a member of the Red Carpet Society.

The event was organized by the Undergraduate Admissions Office, the Red Carpet Society, CU IMAGE and Community Center Programs.

Sushmitha Krishnamoorthy ’17 is a writer intern for the Cornell Chronicle.