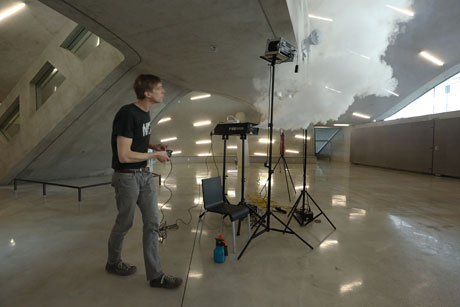 William Staffeld/AAP
Artist Berndnaut Smilde watches during a test with a fog machine for his latest ‘Nimbus’ work in Milstein Hall. 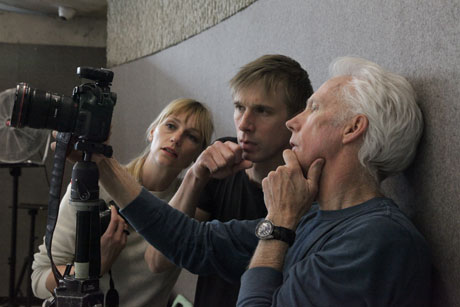 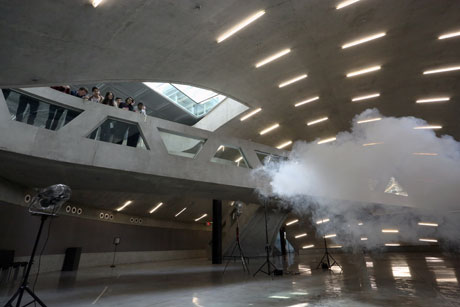 William Staffeld/AAP
Spectators, like these on the Milstein Hall bridge, are usually not present while Smilde works on his indoor clouds.

The works that Dutch artist Berndnaut Smilde has been creating since 2012 are, by design, gone in an instant. The indoor clouds he makes and photographs for his “Nimbus” series “exist for very short moments in a specific location,” Smilde said in a campus lecture April 21.

When he began pursuing this form, he said, “I wanted to see if I could exhibit a raincloud; entering an empty building and have just a cloud free-floating in space.”

His latest “Nimbus” work was created at Cornell in the days preceding the lecture. Smilde spent three days working on the project in Milstein Hall with his partner, Annegret Kellner, and university photographer Robert Barker.

“Clouds represent both representational challenges [for artists] and freedom, and are something of a proof of artistic mastery,” Morris said in his introduction of Smilde. “They can be interpreted as a sign of loss or becoming.” Smilde’s work, he said, “questions the nature of inside and outside, temporality, size, the function of materials and architectural elements.”

Morris noted that Smilde’s art relates to Dadaism and surrealism. “The temporary aspect of the work is key; the cloud is only there for a few seconds before it falls apart,” he said. “The physical aspect is important, but the work exists only as a photograph.”

Once he finds a suitable space, Smilde runs elaborate tests using a fog machine, aerogel (a chemical compound he called “liquid smoke” and the lightest substance on earth) and water vapor, and gathers images, adjusting his placement of equipment and lighting.

Following the lecture, the “definitive single photograph” of the work, “Nimbus: Milstein Hall 2014,” was displayed in the Milstein Dome, the space in which the cloud was made. Smilde has presented the photograph – one of an edition of six – to the college as a gift.

Milstein Hall proved a serendipitous and natural setting for Smilde’s work. The floor of the concrete dome reflected electric lights, the cloud itself and diffuse sunlight coming into the space through windows of different shapes and sizes.

“Every time, I wonder if it’s going to work,” Smilde said, admitting that some of his projects “just don’t work out,” even after testing and working in a space for days. Such is the nature of the cloud.

“It’s really beautiful,” he said of Milstein Dome. “I didn’t know Cornell, and we talked about using Sibley Dome. I liked the connection to Rem Koolhaas in this building. In photographs, you can’t tell the proportions of this space. I thought it was much bigger – I’m glad it was so compact. It’s really empty, really minimalistic and monochromatic.”

The Nimbus series has taken Smilde around the world to conjure his clouds in empty museum and gallery spaces, and into the world of fashion. For a layout in Harper’s Bazaar magazine, designers Karl Lagerfeld, Donatella Versace, Domenico Dolce and Stefano Gabbana, and Alber Elbaz posed for the artist juxtaposed with his clouds in opulent Paris interiors.

“I thought I could have them together, but their egos kind of needed a separate cloud for every person,” Smilde said.

The project and Smilde’s visit were co-sponsored by AAP and the Cornell Council for the Arts’ 2014 Biennial, “Intimate Cosmologies: The Aesthetics of Scale in an Age of Nanotechnology.”