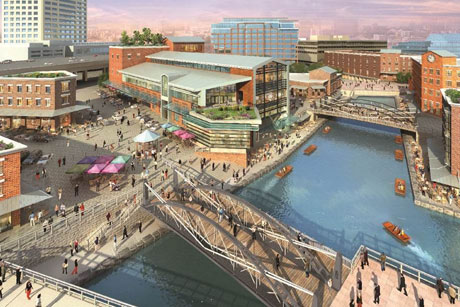 Provided
The Canalside historic redevelopment district on Erie Canal Harbor is among several revitalization efforts in the city of Buffalo. 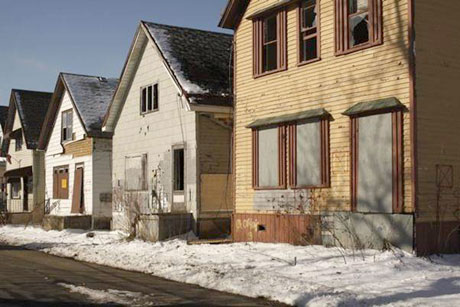 The Buffalo News
Delinquent and underused properties in Buffalo are being renovated and neighborhoods revitalized through initiatives including a regional land bank.

Buffalo, Rochester, Syracuse and Utica exemplify the problems cities everywhere face during a recession. But even under heavy financial constraints, these “Thruway corridor” cities are working to improve quality of life, cut costs, spur growth and address the growing fiscal and social challenges in their communities.

Representatives from the cities and Cornell researchers discussed these challenges and shared strategies at a March 25 conference, “State of New York Cities: Creative Responses to Fiscal Stress,” presented at the ILR Conference Center by the Community and Regional Development Institute (CaRDI) and the Departments of Development Sociology and of City and Regional Planning (CRP).

“Fiscal stress is not unique to New York or the United States,” CRP professor Mildred Warner said in her introduction. The trend in Europe and the U.S. has been “to pass the fiscal crisis down to the local level – pretty much leaving cities to fend for themselves.”

In Buffalo, properties are being renovated to expand the tax base, and a partnership with a parks conservancy helped the city save $2 million in its first year. The city is “promoting programs that matter to people,” such as cultural activities, parks and recreation and social services, graduate student Nidhi Subramanyam said.

“We’re experiencing what is often called the great inversion – the return to cities,” said Lou Jean Fleron of Buffalo’s Partnership for Public Good.

Rochester’s shift from an industrial to a knowledge-based economy followed the loss or downsizing of major employers Kodak, Xerox and Bausch & Lomb, and residents moving to the suburbs.

“There is no magic bullet. Even strong consumer companies are not safe from changes in consumer tastes, changes in technology and the changing world,” CIPA graduate student Patience Milrod said.

To cut costs, the city imposed a debt limit, and fire departments and schools share fueling services. Commercial investments and philanthropy for education have been crucial, and a sustainable-business incubator at the Rochester Institute of Technology could create 11,000 green jobs over the next five years.

Syracuse Mayor Stephanie Miner said a mayor’s job is to be flexible, creative and responsible: “You have to be problem-solvers. You see a lot of economic dynamism in the middle-weight cities. We recognize that immigration is vital to the life of the city, and with an anchor institution like Syracuse University, their success is dependent on the city’s success.”

To correct a $3 million deficit two years ago, Utica Mayor Robert Palmieri cut 120 jobs, almost 20 percent of his city’s workforce. “You can’t be self-sustaining without cuts, but the only thing any municipality has to offer is service. You can’t completely cut services,” but the costs of delivering them can be reduced, he said.

Utica also is pursuing sustainable urban renewal in collaboration with Cornell through Rust2Green, and developing a nanotechnology sector with the State University of New York Institute of Technology, graduate student Clint McManus said.

“This conference is a wonderful representation of Cornell’s land-grant mission in action, with research, teaching and outreach coming together to address real-world issues,” said Rod Howe, CaRDI’s executive director and CCE assistant director.  “Bringing academics, policymakers and practitioners together for a dialogue based on research, data and experience will lead to more informed decisions around the challenges our communities face.”