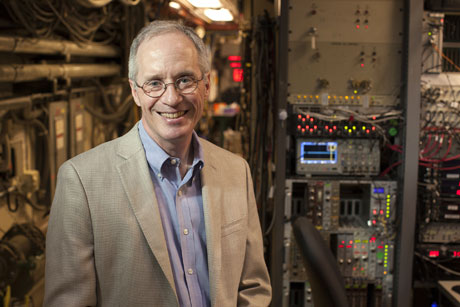 Arduous, year-plus-long scrutiny by the National Science Foundation (NSF) has found the Cornell High Energy Synchrotron Source (CHESS) rich in scientific discovery and exemplary in its use of government funds. CHESS has received its requested grant renewal of up to $100 million over five years, securing the national X-ray facility’s near-term future.

“To be funded in the current economic climate is the best you could possibly hope for,” said Joel Brock, CHESS director and professor of applied and engineering physics. “We’re absolutely thrilled, and it’s a real testament to the quality of the staff here – their hard work, creativity and unique capabilities.”

CHESS is supported by the NSF’s Division of Materials Research, and it provides synchrotron X-ray capabilities to roughly 1,200 users each year.

CHESS is one of only two high-energy synchrotron sources in the U.S. (The other is the Advanced Photon Source at Argonne National Laboratory.) But what distinguishes CHESS from other national facilities, said Brock, is its culture and mission: encouraging novel, high-risk, high-reward research projects and maintaining an emphasis on science and engineering education programs at all levels.

Among the advanced synchrotron radiation technologies Cornell has developed recently are photoinjectors and superconducting acceleration capabilities for the highest-current electron beams in the world, and many types of X-ray detectors, novel X-ray sources and X-ray optical devices.

About three-quarters of CHESS’s $20 million yearly budget is spent on salaries. In addition to eight graduate students and three postdoctoral associates, the CHESS award supports more than 130 Cornell employees. The remainder of the budget is spent on electricity, liquid nitrogen and equipment, according to Brock.

The funding renewal will allow CHESS to continue developing experimental techniques and technology based on high-energy X-ray beams, all aimed to best serve research on advanced materials in, for example, next-generation batteries and structural materials for aircraft engines, and on the atomic structure of viruses and other important macromolecules. CHESS officials hope that its plans to substantially enhance the performance and capabilities of this X-ray source will also come to fruition in coming years.

An early stage upgrade to CHESS will be the addition of cutting-edge compact X-ray sources called undulators to three of its six beamlines, which will increase the beams’ spectral brightness by a factor 100. These undulators were successfully tested at CHESS in 2012 and 2013.

In the longer term, CHESS scientists are hopeful to break ground on the Energy Recovery Linac project, a major upgrade to the CHESS beamlines and accelerator (Cornell Electron Storage Ring, or CESR) that would offer among the world’s brightest and most powerful X-rays.