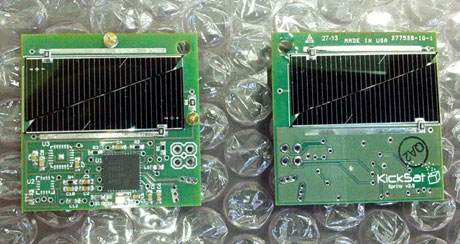 Zac Manchester
"Sprite" mini satellites that are now in orbit.

After years of planning and several last-minute delays, about 100 Cornell-developed mini satellites demonstrating space flight at its simplest have launched into orbit and are now circling Earth.

With just a laptop, antenna and a few other basics, space flight enthusiasts can listen for signals sent by the cracker-sized “sprites” that launched April 18 aboard a SpaceX Falcon 9 rocket as part of NASA’s CRS-3 mission. Still inside their mothership craft, the sprites are scheduled to deploy on May 4 to become the smallest free-flying spacecraft. 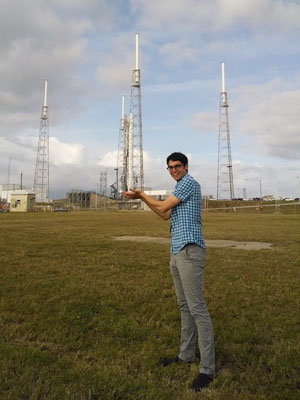 Sprites are satellites stripped down to their most basic components: a microcontroller, transceiver and solar cells for power. Manchester took to Kickstarter in 2011 to see if amateur space enthusiasts would help fund the project.

More than 300 people sponsored KickSat and were allowed to transmit whatever signal they wanted from it – for example, their initials or a message to a loved one. The KickSat housing is engraved with the sponsors’ names.

The sprites are housed inside a CubeSat, which is a small satellite frequently used in space research. The CubeSat is aboard a capsule that separates from the shuttle, which continues to the International Space Station. The KickSat CubeSat is second in line to deploy. (Other research missions are aboard.)

The big event – when the sprites leave the spacecraft and begin transmitting signals – will be the afternoon of May 4 (subject to change).

Manchester has been updating his Kickstarter blog with mission information.

“After a beautiful launch at 3:25 this afternoon [April 18], KickSat was deployed in low Earth orbit. We at Cornell and several amateur radio operators around the world have made contact with the spacecraft, and it is alive and well. I can't thank all of you enough for your tremendous support over the past two years. Thank you for believing in KickSat!”