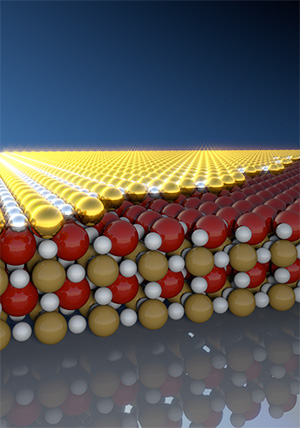 Haofei Wei
An artist’s rendering of the thickness-driven, metal-insulator transition in sub-nanometer films of a lanthanum nickelate. Nickel atoms are shown in gold, oxygen atoms in white, and lanthanum atoms in red, and metallicity is achieved in going from two to three atomic layers.

Ever-shrinking electronic devices could get down to atomic dimensions with the help of transition metal oxides, a class of materials that seems to have it all: superconductivity, magnetoresistance and other exotic properties. These possibilities have scientists excited to understand everything about these materials, and to find new ways to control their properties at the most fundamental levels.

Researchers from Cornell and Brookhaven National Laboratory have shown how to switch a particular transition metal oxide, a lanthanum nickelate (LaNiO3), from a metal to an insulator by making the material less than a nanometer thick.

Using an extremely precise growth technique called molecular-beam epitaxy (MBE), King synthesized atomically thin samples of the lanthanum nickelate and discovered that the material changes abruptly from a metal to an insulator when its thickness is reduced to below 1 nanometer. When that threshold is crossed, its conductivity – the ability for electrons to flow through the material – switches off like a light, a characteristic that could prove useful in nanoscale switches or transistors, Shen said.

Using a one-of-a-kind system at Cornell, which integrates MBE film growth with a technique called angle-resolved photoemission spectroscopy (ARPES), King and colleagues mapped out how the motions and interactions of the electrons in the material changed across this threshold, varying the thickness of their oxide films atom by atom. They discovered that when the films were less than 3 nickel atoms thick, the electrons formed an unusual nanoscale order, akin to a checkerboard.

The results demonstrate the ability to control the electronic properties of exotic transition metal oxides at the nanometer scale, as well as revealing the striking cooperative interactions that govern the behavior of the electrons in these ultrathin materials. Their discovery paves the way for making advanced new electronic devices from oxides.

The work was supported by the Kavli Institute at Cornell for Nanoscale Science, the Office of Naval Research, the National Science Foundation through the Cornell Center for Materials Research (MRSEC program), and the U.S. Department of Energy, Basic Energy Sciences.