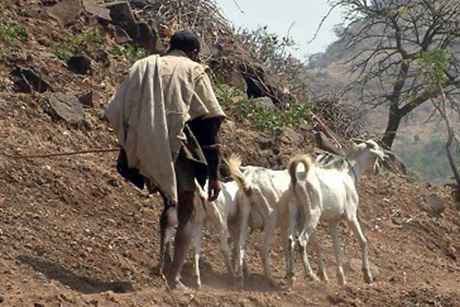 Provided
Goat herders in Kenya were protected against drought this year, thanks to a novel insurance plan developed by Cornell professors.

After a dry season that decimated livestock, Kenyan herders recently received some welcome relief familiar to American farmers but far less common in Africa – insurance compensation for their losses.

More than 100 Muslim pastoralists are the first beneficiaries of Index-Based Livestock Takaful (IBLT), livestock insurance that combines state-of-the-art satellite imagery with the Islamic principle of takaful, a cooperative system for sharing losses. Led by Chris Barrett, the David J. Nolan Director of the Charles H. Dyson School of Applied Economics and Management, Cornell is the major research partner in a consortium that is creating culturally acceptable insurance products to reduce the impact of extreme weather on some of the developing world’s most vulnerable populations.

In arid northeastern Kenya, livestock losses due to drought keep people mired in poverty. Most households in this heavily Muslim region previously had no access to insurance markets or rejected conventional insurance as violating the tenets of Islam. IBLT is an innovative risk-management product that allows participants to insure against drought-related herd loss, while following Islamic sharia law. When estimated livestock losses in the area exceed a specified level, the insurer reimburses contract holders based on their total contributions. Last month, the pilot program paid participants a total of $5,800 for sheep, goats, cattle and camels lost during the dry season that ended in March.

IBLT is the latest adaptation of Index-Based Livestock Insurance (IBLI), an instrument designed at Cornell and launched as a commercial pilot in northern Kenya in 2010. IBLI performed as designed during the severe 2011 drought, generating payouts that substantially reduced policyholders’ suffering from the disaster. The U.S. Agency for International Development (USAID) awarded IBLI a Pioneers Prize in Science and Technology in 2013.

What sets the index-based products apart from other insurance schemes is that predictions of livestock losses are based on satellite imagery that measures the condition of grazing lands. Cornell researchers and their partners have found that this statistical approach can accurately predict average herd losses, eliminating the need for costly verification of individual loss claims. About 4,000 Kenyan herders and 400 Ethiopian pastoralists have purchased IBLI contracts since 2010.

Cornell faculty members are collaborating with the International Livestock Research Institute and other partners to carry out impact evaluations and adapt IBLI contracts to new areas, including southern Ethiopia. Barrett and faculty fellow Stephen DeGloria, crop and soil sciences, were instrumental in launching an ongoing project, seeded by an Atkinson Center Rapid Response Fund award, to investigate the environmental impacts of IBLI. DeGloria’s team is working with researchers from Cornell’s Institute for Computational Sustainability, led by faculty fellow Carla Gomes, computer science, to uncover what IBLI environmental monitoring data reveals about how livestock movement and behavior affect ecosystem services.