When Justin Kondrat ’14 transferred to Cornell from SUNY Morrisville, it didn’t take long for him to feel rooted. Among the ivy, he found fertile ground to thrive and grow, through an anchoring network of teachers, mentors and friends who cultivated his creativity and passion for plants.

That passion has been transformed into a living tribute to the power of nature to foster well-being and captivate a community: a display of more than 50,000 golden daffodils, white narcissus and purple hyacinth flowers spelling out the word “rooted” in 10-foot letters along the steep side of Libe Slope below the bell tower.

The installation glows red and white at night, thanks to solar-powered lights that have been woven between the flowers.

Although it started as Kondrat’s independent project under the guidance of senior lecturer of horticulture Marcia Eames-Sheavly, more than 100 people ended up taking part, from planting 13,000 bulbs to transporting, arranging and staking 350 pots. 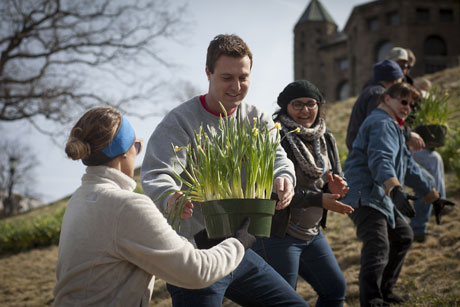 Jason Koski/University Photography
Students install some 50,000 daffodils, white narcissus and purple hyacinth to spell "rooted" on the steep side of Libe Slope. 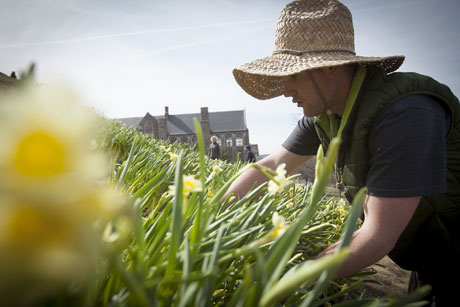 Jason Koski/University Photography
The brainchild of Justin Kondrat ’14, the independent project conveys that Cornell "you can really be inclusive and come together as a community" at Cornell. 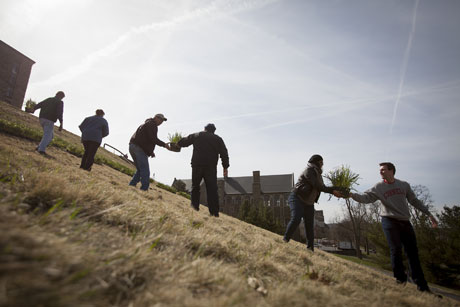 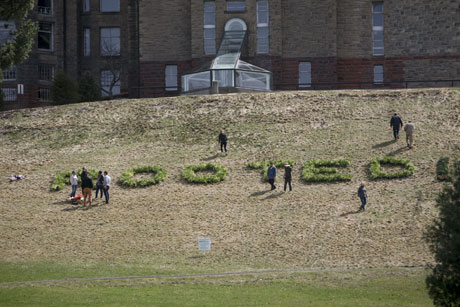 Jason Koski/University Photography
The 10-foot letters glow red and white at night, thanks to solar-powered lights that have been woven between the flowers.

They also helped him overcome a growing list of logistical hurdles, such as temperature control to ensure the bulbs bloomed at the right time and in a staggered way so that the display lasted two weeks. Then there was the Ithaca weather – a late freeze April 15 meant the intended installation date had to be changed at the last minute.

But Kondrat said the setbacks only strengthened the experience for him.

“It really illustrates the kind of things that can happen at Cornell,” Kondrat said. “It’s a place where you can find a home and express beauty among people who study what they love. It’s a place where you can really be inclusive and come together as a community. As a queer student with a learning disability, I hope this installation inspires various communities to never give up on their dreams when times get tough.”

The installation was celebrated April 17 at a ribbon-cutting event featuring comments from Kathryn Boor, the Ronald P. Lynch Dean of the College of Agriculture and Life Sciences, and Marvin Pritts, chair of the Department of Horticulture.

“As we move through the coming weeks of exams, term papers, interviews and possibly graduation, look upon this intersection of art and science with the knowledge that whatever comes our way, we will not simply cope, but we will blossom,” Pritts said. “We are strong. We are rooted. We are Cornellians.”

Eames-Sheavly, who directs a new minor in horticulture with a focus on botanical arts, praised the project as a great example of how art informs and inspires. She also acknowledged the support of the university administration and grounds department.

“They recognized it as an important gesture and not just a pretty one,” Eames-Sheavly said. “This could only happen at this university.”

Gannett Health Services has embraced the project as a living example of its message, “Success is rooted in balanced living.” It has teamed up with Kondrat and Eames-Sheavly for displays in Olin Library, Mann Library, Gannett Health Services and the Big Red Barn, inviting people to share their thoughts about how and where they are rooted at Cornell.

Kondrat said he has received dozens of responses so far, ranging from “yoga at the Plantations” to “Latino Living Center.” He will incorporate some of the responses into a future exhibit on campus and a presentation at the annual meeting of the American Public Gardens Association in Denver in June.

The installation will remain in place until May 1, but the message may linger longer as an imprint in the grass.