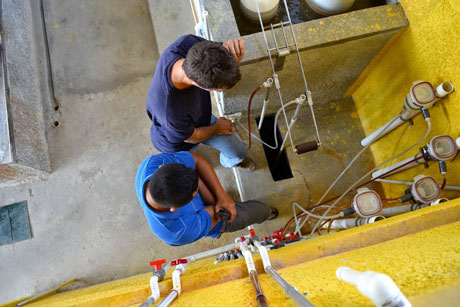 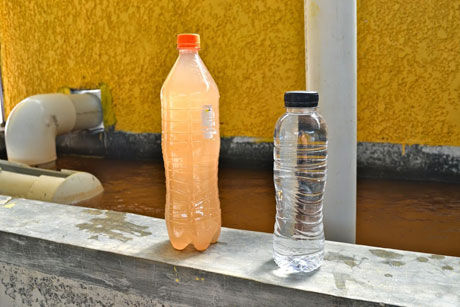 With the inauguration of another student-designed water treatment plant in Honduras, 36,000 Hondurans and counting have access to clean water.

AguaClara is a student engineering team that designs municipal water treatment systems in rural Honduras and has recently started operating in India. On April 5, the municipality of San Nicolas, population 6,000, celebrated the startup of AguaClara plant No. 9 in Honduras.

A few team members and alumni of AguaClara were on hand to attend the party, including faculty leader Monroe Weber-Shirk; student team leader Tori Klug ’14; Drew Hart ’10, M.Eng. ’11, who is AguaClara’s engineer on the ground in Honduras; and Sarah Long ’09, a co-founder of AguaClara LLC, a social enterprise that deploys AguaClara technology globally.

Other guests in attendance: Duane Stiller ’84, who financed the inauguration trip for AguaClara team members; and Ken Brown ’74 and his wife, Elizabeth Sanjuan, who have provided ongoing support for AguaClara since the first plant in Ojojona opened in 2007.

Also at the inauguration were members of Agua Para El Pueblo, AguaClara’s Honduran nonprofit partner that facilitates the implementation of the water plant projects.

“One wonderful aspect of the project was that there were previously several households at a higher elevation than the distribution tank who did not have water running into their homes,” Klug said. “Now, with the plant at a slightly higher elevation, safe water is sent directly from the plant to these homes.”

Other improvements at the San Nicolas plant:

The plant’s capital cost was funded by the Swiss Agency for Development and Cooperation, along with a significant community contribution.

Construction of what will be Honduras’s 10th AguaClara plant is underway in the municipality of Moroceli, to be completed later in 2014.