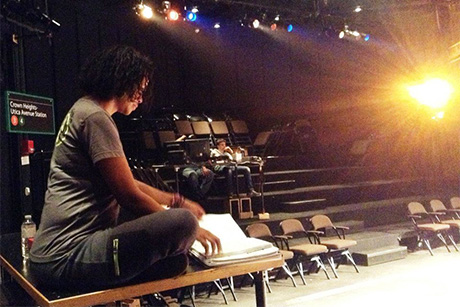 From villagers in Cameroon, West Africa, to war veterans in Ithaca, a Cornell-affiliated project uses theater to help empower people to express themselves and stage their stories.

Performing Arts for Social Change (PASC) is a strategic initiative of the Center for Transformative Action, a Cornell-affiliated social entrepreneurship nonprofit, founded and directed by Cynthia Henderson, an associate professor of theater arts at Ithaca College.

Through this process, she says, participants find new ways to understand, discuss and deal with often painful or taboo subjects.

“The things that different people need to express are different flavors of the same experience, because we’re all human,” Henderson says. “There are women’s rights issues everywhere. There are diseases, eating disorders, poverty, PTSD. What PASC offers people is an opportunity to express what they’re dealing with through the arts.”

For example, students at Ithaca’s Lehman Alternative School worked on the issue of being disabled in a world created for the able-bodied. At the MacCormick Secure Center, a detention center for violent youth offenders, residents looked at how new approaches might help them achieve what they want out of life. In Cameroon, villagers used theater to raise awareness for AIDS. At Ithaca High School, students dealt with racial unrest and violence in their school.

Henderson says her work in Harlem in the 1980s inspired PASC. She created monologues with youth, many of them gang members, about “why they chose the life they chose.” Theater “gave them an opportunity to be heard outside of violent action,” says Henderson.

Henderson says that the projects unfolds organically. “We never go in with a written project. The first rule of PASC is that we listen and find out what it is participants need to say, and then together we create the pieces,” Henderson says.

Rather than just have an effect on the audience, Henderson intends to transform the performers – those telling their stories. “Some of our pieces go public ... and some of the pieces stay in house because it’s really about their work,” explains Henderson. While the experience is personal, individual expression often leads to community transformation. For example, after a young man at a New York state correctional facility participated in a PASC project, he was surprised, according to Henderson, to discover “he really wanted to do something to help other people, rather than doing something for himself.”

PASC’s newest initiative – “Teach our truth. Reach our youth. Engage our communities. Explore our world.” (TREE) – combines improvisational theater games, creative writing, visual arts and music in a proactive and creative way. An improv theater-and-music game, for example, might ask one participant to express himself or herself verbally, while another responds by interpreting that expression on a musical instrument.

This summer, PASC will work with a community-based visual arts program in Bahía de Caraquéz, Ecuador, to teach an acting workshop. Latin American youth and U.S. students will create a 30-minute play in English to highlight issues in the town. The resulting production and a follow-up Q-and-A will be part of a film and theater festival taking place later in the summer.

In New York, PASC will team up with Acting Out NY, an acting and film-making program for youth, this summer. “PASC will help kids write a script to send an anti-bully message and use the kids’ own experience to facilitate the writing of that script,” says program director Darcy Martin-Rose.

To volunteer or support the program, email performingartsforsocialchange@gmail.com.

Matthew Honold is an Ithaca-based grant writer for community organizations and the creative arts. This article was abridged from its original published in the April issue of the Center for Transformative Action’s CTA News.