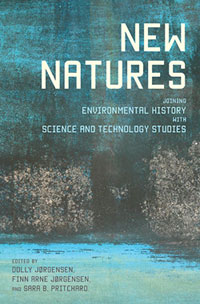 Realizing that global issues such as climate change, invasive species and the rise of genetically modified organisms require interdisciplinary solutions, physical scientists and social scientists are working together on research projects like never before.

“People are starting to think about STEM [science, technology, engineering, math] fields not just as technological and scientific domains, but also situated both socially and historically,” Pritchard said. “For example, with climate change, we don’t just need to know the science, but we need to think about the politics and the social questions together with the science and about how one shapes the other.”

The book includes 13 chapters from scholars in science and technology studies who examine historical and contemporary issues “using a method or concept that has been particularly fruitful within STS and thinking about how that work might enrich environmental history, a subfield that explores the complex dynamics between humans and non-human nature in the past,” Pritchard said.

For example, Dolly Jørgensen explores the “rigs to reefs” debate in California, where the state is considering whether to keep or tear down vacated oil rigs in the ocean. There are solid environmental reasons for each option, Pritchard said. The rigs have become ecosystems supporting colonies of fish and other organisms.

“Jørgensen’s example shows that the boundaries between nature and technology are really complicated,” she said. “Both sides are enacting a different idea of the environment, but each believes it is being ‘pro-environment.’“

Because the issue can’t be simplified to one “right” scientific answer, state lawmakers are grappling with their definitions of nature – whether the environment is better off in a “pure” state without any human-made objects like oil rigs, or whether the new ecosystem created is a valuable contribution to the environment. At the same time, they are considering questions of economics and politics as they make a decision, she said.

Pritchard said scholars in STS and environmental history have been eager to collaborate for some time, and scholarship at this nexus has emerged over the last decade. The National Science Foundation is also more interested in supporting research projects that show a strong interdisciplinary component.

“In some cases, a research program has social and ethical considerations tacked on as an afterthought,” Pritchard said of NSF applications. “But if you have a truly interdisciplinary collaboration, you can envision a project imagined from the ground up in a way where social, political and ethical implications are considered when the research question, experiment or methods are designed.”

Not only does including these implications make the project richer in its scope, it can also call attention to unintended consequences in research design, Pritchard said. She cites examples of medical studies where researchers either ignore or reinforce certain racial- or gender-based biases by the way their study is framed.

Collaborative work by environmental historians, social scientists and physical scientists can lead to a deeper understanding of the challenging issues our world faces, Pritchard said. A growing number of scientists have said we are living in a new geological time period, the Anthropocene, she said.

“Some scientists have argued that human impact on the planet is now so great that we are a geologic force,” Pritchard said.

Pritchard co-edited the book with Dolly Jørgensen, a researcher in the Department of Ecology and Environmental Science at Umea University in Sweden, and Finn Arne Jørgensen, associate senior lecturer in the history of technology and environment at the same university.