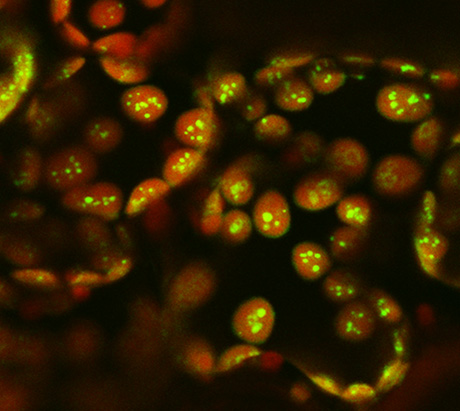 As humanity faces more mouths to feed thanks to a swelling global population, new research has taken a step toward employing genes from blue-green algae to improve staple crop photosynthesis – a potential improvement that could boost plant efficiency and increase yields.

The study was published online May 8 in The Plant Journal.

All plants employ an enzyme called Rubisco to fix carbon dioxide during photosynthesis, where plants combine carbon dioxide, water and light to make oxygen and sucrose; the plant uses sucrose for energy and to build new plant tissues.

But Rubisco reacts with both carbon dioxide and oxygen in the air. When it reacts with oxygen, increasingly in warmer temperatures, the rate of photosynthesis decreases and it lowers yields.

Until now “nobody had been able to show you can make this micro-compartment in plants,” said Myat Lin, the paper’s first author and a postdoctoral fellow in the lab of Maureen Hanson, a senior co-author of the study and Liberty Hyde Bailey Professor of Plant Molecular Biology at Cornell.

Lin devised a way to insert the algal genes for making the outer layer – known as the shell – of the micro-compartments into model tobacco plants, said Hanson.

Now that the researchers have a method to insert these shells into chloroplasts – the organelles in plant cells where photosynthesis occurs – the next steps will be to incorporate Rubisco, other proteins and an enzyme that helps transport carbon dioxide into Rubisco with the micro-compartments.

The National Science Foundation and the Biotechnology and Biological Sciences Research Council in the U.K. funded the research.