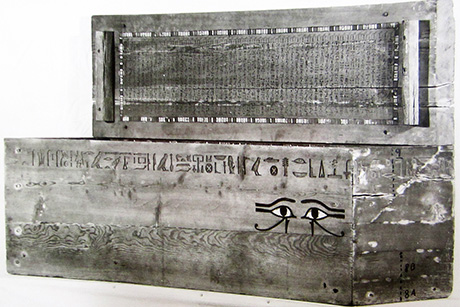 Provided
A view of Ipi-ha-ishutef’s coffin when originally sampled in 1938. 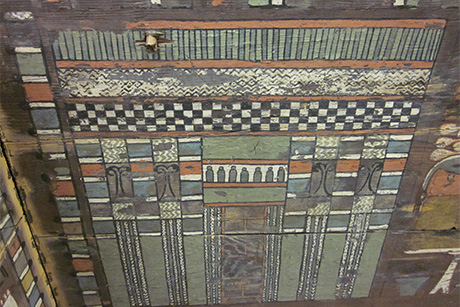 S. Cristanetti, A. Whyte/University of Chicago’s Oriental Institute
The coffin of Ipi-ha-ishutef showing details of the decorations on the walls. This is the coffin tree ring samples were taken from.

A handful of tree ring samples stored in an old cigar box have shed unexpected light on the ancient world, thanks to research by archaeologist Sturt Manning and collaborators at Cornell, Arizona, Chicago, Oxford and Vienna, forthcoming in the June issue of the Journal of Archaeological Science.

The samples were taken from an Egyptian coffin; Manning also examined wood from funeral boats buried near the pyramid of Sesostris III. He used a technique called “dendro radiocarbon wiggle matching,” which calibrates radiocarbon isotopes found in the sample tree rings with patterns known from other places in the world that have already identified chronologies, such as the long European oak chronology or the bristle cone pine trees of North America.

Because the dating was so precise – plus or minus about 10 years – it helps confirm that the “higher” Egyptian chronology for the time period is correct, a question scholars have hotly debated.

But the samples also showed a small, unusual anomaly following the year 2200 B.C. Paleoclimate research has suggested a major short-term arid event about this time.

“This radiocarbon anomaly would be explained by a change in growing season, i.e., climate, dating to exactly this arid period of time,” says Manning. “We’re showing that radiocarbon and these archaeological objects can confirm and in some ways better date a key climate episode.”

That climate episode, says Manning, had major political implications. There was just enough change in the climate to upset food resources and other infrastructure, which is likely what led to the collapse of the Akkadian Empire and affected the Old Kingdom of Egypt and a number of other civilizations, he says.

“The tree rings show the kind of rapid climate change that we and policymakers fear,” says Manning. “This record shows that climate change doesn’t have to be as catastrophic as an Ice Age to wreak havoc. We’re in exactly the same situation as the Akkadians: If something suddenly undid the standard food production model in large areas of the U.S. it would be a disaster.”

Manning is the Goldwin Smith Professor of Classical Archaeology and director of the Malcolm and Carolyn Wiener Laboratory for Aegean and Near Eastern Dendrochronology.