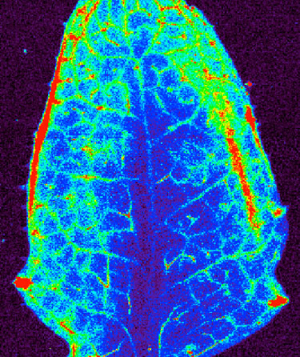 Tracy Punshon and Mary Lou Guerinot/Dartmouth College)
The figure shows a synchrotron X-ray fluorescence image of the spatial distribution of iron in a mature leaf of an Arabidopsis plant that lacked the gene for expressing the iron transporter OPT3. The image shows that without the signaling role of OPT3, leaves are flooded with iron (green), but the plant behaved as if it was iron deficient, pumping yet more iron in through the roots.

With news reports of toxic cadmium-tainted rice in China, a new study describes a protein that transports metals in Arabidopsis plants and holds promise for developing iron-rich but cadmium-free crops.

Iron and cadmium are both found in soil and are interchangeably taken up by iron transporters in plants. Pollution and heavy fertilizer use have increased soil cadmium levels in China, for example. In humans, cadmium can damage internal organs and cause cancer. At the same time, iron is an essential nutrient for plants and humans. Iron deficiency affects 30 percent of the world’s population, particularly in developing countries.

The interdisciplinary, Cornell-led study, published May 27 in The Plant Cell, describes an important role of a protein that transports nutrients – the transporter OPT3  – in maintaining balance of the essential micronutrient iron in Arabidopsis, small plants related to cabbage and mustard that are used as models for studying plant biology.

OPT3 function in plants was previously unknown, but it was thought to transport short chains of amino acids called peptides around the plant.

The new work finds that OPT3 transports iron and is involved in signaling iron concentrations – from leaves to roots – to regulate how much iron from the soil is needed by the plant. This function allows the plant to partition cadmium away from the edible portions of plants, including seeds (grain).

“One would hope that this transporter can be used to produce iron-fortified rice and other grain crops one day,” said Olena Vatamaniuk, associate professor of crop and soil sciences, and the paper’s senior author. Zhiyang Zhai, Ph.D. ’11, a former Ph.D. student in Vatamaniuk’s lab, initiated this study and is the study’s first author.

In the study, the researchers used Arabidopsis that lacked the gene for expressing OPT3. Its leaves were flooded with iron, but the plant behaved as if it were iron-deficient, absorbing yet more iron through the roots. The plant also was unable to move iron into seeds and moved cadmium there instead.

Sheena Gayomba, a graduate student in Vatamaniuk’s lab and a co-author on the paper, discovered that OPT3 is responsible for signaling iron levels from the leaves to the roots to maintain homeostasis.

In control plants, OPT3 helps move iron into the phloem (tissue that conducts sugars and other products downward from the leaves), controls iron signaling from shoots to roots, and redistributes iron from mature leaves to developing tissues, including seeds.

“Our work suggests that manipulation of the expression of OPT3 can provide promising avenues for targeted biofortification strategies directed at increasing iron density, while omitting cadmium, in the edible portions of crops,” said Vatamaniuk.

Future work will examine the function of similar iron transporters in rice and other crops, and will explore OPT3’s role in moving iron and cadmium around the plant.

Co-authors also include Miguel Pineros and Leon Kochian of the U.S. Department of Agriculture’s Robert Holley Center for Agriculture and Health at Cornell, David Salt of the University of Aberdeen in Scotland, and Mary Lou Guerinot of Dartmouth College.

The study was funded by the National Science Foundation, a Cornell University Agricultural Experiment Station Hatch grant and the Division of Chemical Sciences, Geosciences and Biosciences, Office of Basic Energy Sciences of the U.S. Department of Energy.