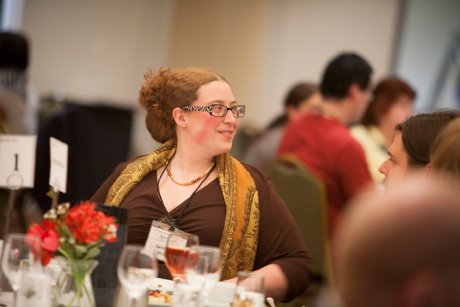 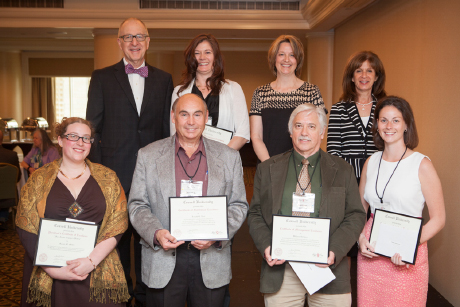 Known by her colleagues as having “a great mind,” “extraordinary work ethic” and “sincere caring,” Sarah Miller, a veterinary technician in the Cornell University Hospital for Animals, was recognized by President David Skorton with the President’s Award for Excellence May 19 at the second annual Employee Recognition Luncheon. Skorton also recognized two staff members with awards for individual excellence and two for management excellence.

The President’s Award for Excellence is for staff leaders at all levels who embody the university values, demonstrate inclusiveness, collaboration and respect, and further the mission of Cornell through their strategic planning and leadership, Vice President Mary Opperman said in her opening remarks.

In presenting the president’s award, Skorton noted that Miller’s colleagues say: “She is the best among us. She is our foundation.” One colleague wrote that Miller knows “just the right words to say” to a distressed colleague or student and how to assist that person in their moment of need. “Never does she leave without fully knowing every patient and every person is in a good place,” wrote another.

Individual Excellence Awards recognize staff members who demonstrate commitment and dedication to Cornell values, have a positive and influential impact on their work environment, are flexible and motivated, and foster collaboration. Skorton presented this award to Joseph Ebel, manager of Technical Services at the Animal Health Diagnostic Center, and to Lindsay Jones Hansen, residence hall director for Residential Programs.

Not only has Ebel’s work on melamine analysis had international impact, Skorton said, but he “has built Analytical Toxicology to be one of the leading veterinary toxicology labs in the U.S.”

Hansen is known for “the enthusiasm and care that she puts into every aspect of her job,” as well as for her “willingness to be honest with individuals, while still being attentive and empathetic,” he said.

The Management Excellence Award recognizes managers who create an inclusive environment that develops, empowers, engages, challenges and motivates his or her staff with a result of greater productivity and effectiveness. Skorton presented this award to administrative managers William Gilligan in the mathematics department and Dorothy Vanderbilt in the philosophy department, both in the College of Arts and Sciences.

Gilligan, Skorton said, is described by his colleagues as “smart, judicious, funny and fair” and as someone who “always has the university, department and his staff’s best interests at heart.” One colleague called Gilligan “the best supervisor I have had at Cornell,” Skorton said.

Vanderbilt is set apart as an exceptional leader by her problem-solving abilities, Skorton said. Colleagues say that Vanderbilt’s judgment has proven so sound that “what would Dorothy do?” has become a mantra for many of them, he said. She is also known for her “tone of unfailing positivity and good cheer … her door is always open.”

The luncheon, held in the Statler Ballroom, was hosted by Skorton, Opperman and the Employee Recognition Team. All 62 nominees were invited to ask a guest, their supervisor and their vice president or dean to attend. The awards were developed by the Employee Recognition Team partly in response to the 2012 employee survey and to help integrate gratitude into Cornell’s daily life and culture, said Opperman. Gratitude “pushes employees to stretch and thrive, demonstrates and reinforces Cornell’s values, builds morale and creates a sense of community,” she said.