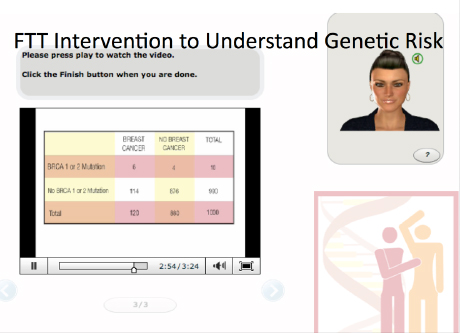 Provided
A screen shot from the BRCA Gist (Web-tutor) video tutorial that is designed to help explain the incidence of breast cancer in people with the BRCA mutations.

About one in eight American women will be diagnosed with breast cancer during her lifetime – more than 200,000 this year alone. A simple blood test can determine if a woman faces increased risk due to genetic mutations, yet decisions about whether to get the test and what to do about the results are far from simple – a fact exemplified by Angelina Jolie’s choice to undergo a double mastectomy last year upon learning she carried a harmful BRCA1 gene mutation.

“To our knowledge, this is the first use of an Intelligent Tutoring System (ITS) in patients’ medical decision making,” said Reyna, professor of human development and director of the Human Neuroscience Institute in Cornell’s College of Human Ecology.

BRCA Gist provides customized instruction on breast cancer and how it spreads, risk factors, genetic mutation testing and the consequences of testing using an animated talking avatar that engages women in “dialogue” about breast cancer and can even answer women’s questions.

The Web-tutor draws on well-vetted, publically available information and expert advice from physicians, “but the crucial added ingredient,” said Reyna, “is that it effectively conveys the bottom-line or gist of the information.” And that’s what people rely on to make medical decisions, not detailed facts, she said. The key to the Web-tutor’s success, she added, is its basis in fuzzy-trace theory, a model of memory and decision-making that she developed.

The team found that those who participated in the Web-tutor scored higher on knowledge of breast cancer, genetic testing and genetic risk than those using the NCI website, and both groups scored higher than the control group. In making judgments about genetic testing for those with no risk, the Web-tutor helped participants understand that most women do not have known genetic risks and are not good testing candidates, the authors say. Their results support the concept that a gist-based intervention powered by artificial intelligence can be an effective tool to aid patients’ medical decision-making, they concluded.

The study, “Efficacy of a Web-based Intelligent Tutoring System for Communicating Genetic Risk of Breast Cancer,” was supported by the National Cancer Institute and the National Institutes of Health. The co-authors are Christopher Wolfe, Colin Widmer, Elizabeth Cedillos, Christopher Fisher and Audrey Weill of Miami University of Ohio, and Cornell graduate student Priscila Brust-Renck.