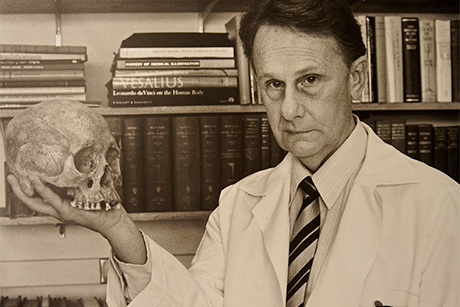 Kenneth A.R. Kennedy, professor of physical anthropology at Cornell for 41 years – known for his field studies of early humans and their predecessors in South Asia – died April 23 in Ithaca. He was 83.

Cornell students remember Kennedy for the popular course taught from his Stimson Hall laboratory, Human Biology and Evolution. Law enforcement officers appreciated his forensic-anthropology skills with discovered remains. And carpal-tunnel-syndrome sufferers at least knew why they hurt – after Kennedy divulged the harm occupational stress wreaks on bodies young and old.

Born June 26, 1930, and educated at University of California, Berkeley (including his Ph.D. with paleoanthropologist and forensic anthropologist Theodore D. McCown), Kenneth Adrian Raine Kennedy joined the Cornell faculty in 1964. He taught in the Departments of Anthropology, Asian Studies, and Ecology and Evolutionary Biology. He received emeritus status in 2005.

An anthropologist in India, learning of Kennedy’s death, called him “the father of human paleontology” in South Asia. At Cornell, the professor of nutritional science who co-taught the human biology class with Kennedy, Jere D. Haas, recalled a teaching venue quite apart from the skulls of Stimson Hall, “at his home in front of a crackling fire – the discussion fueled by his many stories from the field and delicious treats prepared and served by Margaret, who predeceased Ken by five months.”

Nerissa Russell, professor and chair of anthropology, said Kennedy was one of the first to make forensic anthropology “a real focus of his work rather than an occasional sideline.”

One Cornell alumnus, who learned anthropometry in the Stimson Hall lab in 1966, didn’t know about Kennedy’s forensics reputation ... until: “I was up studying the bones one evening before a prelim, and, being late, I decided to lay down on one of the tables with a sandbag under my head,” recalls Laurence “Larry” Reich ’67, a dentist in Massachusetts and parent of a Cornellian. “The next morning he came in, and thought at first he’d been delivered a new cadaver!”

The list of professional societies Kennedy served, as an elected officer, was longer than an Austalopithecus shinbone. He received the T. Dale Stewart Award in Forensic Anthropology in 1987 and was elected as a fellow of the American Association for the Advancement of Science in 1992.

Some of his published papers could have been grist for “CSI: Bedrock,” with such titles as “Blunt and sharp force traumatic markers on early historic crania from Mantai, Sri Lanka.” Textual puns abounded in Kennedy’s work: witness, “The Wrong Urn: Commingling of Cremains in Mortuary Practices.”

Asked whether forensic anthropologists of the future could examine Kennedy’s skeleton and know it belonged to a college professor, he joked: “You mean the abnormally small brain?”

Not really, but the paleoanthropologist’s skeleton should bear evidence, he added, of a lifetime of violin playing.