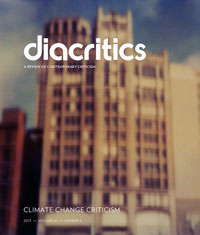 Thirty years ago, nuclear war seemed imminent and personal. When the atomic apocalypse film “The Day After” was shown on television in 1983, Karen Pinkus '84 remembers “this sense of incredible terror. The atmosphere then was permeated by nuclear fear.”

The struggle to understand how to read literature and write under nuclear threat inspired a special issue of diacritics, the review of contemporary criticism published since 1971 by Cornell’s Department of Romance Studies. Richard Klein, professor emeritus of French, edited that issue and – 30 years later – has contributed an essay to a new issue edited by Pinkus on the subject of climate change.

“This issue marks the anniversary and reflects on the differences between that moment of ‘nuclear criticism’ and the present moment,” says Pinkus, professor of Italian and comparative literature in the College of Arts and Sciences.

Contributors to the new issue examine how we think about literature differently today from when we more directly experienced the fear of the mushroom cloud, says Pinkus. “The nuclear threat hasn’t gone away, but it’s been pushed to the margins. Most people don’t have moments of panic anticipating a nuclear bomb.”

Klein’s new essay is titled “Climate Change Through the Lens of Nuclear Criticism.” He writes: “It was in 1945, at the start of the nuclear era, that humans for the first time created the capacity to destroy civilization. Since then, we have arrived at new means to accomplish the same end.”

Each of the writers in the issue wrestle with the writing and legacy of Jacques Derrida, the late founder of deconstruction, says Pinkus. Derrida, who wrote about contemporary conditions, did not directly address climate change. In part this is because it was not a term in widespread circulation prior to his death. Still, some critics have lamented his lack of attention to what is arguably the most significant threat faced by humans. Nevertheless, Klein notes that, “despite many differences, [we] speak at the same time of total nuclear war, pandemic and eco-catastrophe.”

For Klein, even if society were somehow able to reconstruct itself after climate catastrophe – even if science, law and history recovered – literature, with “its conventions, its reading public, its critics and merchants, editors and printers … all that could never be revived.”

In the last few years, Pinkus says there’s been an “explosion of humanists interested in ecology, environment and, to a lesser degree, climate change.” As Pinkus notes in her introduction, “humanists have begun to turn their critical attention to climate-related issues ranging from theories of deep time to environmental justice and international negotiation practices.”

“Confronting climate change requires us to muster all the resources to deal with it, and that includes philosophical thinking about the nature of what we’re confronting,” adds Pinkus. “That broader perspective is essential, as it offers another way of thinking – perhaps an impractical way, but one that it is more attuned to the enormity of the challenges – that the more local technical and scientific solutions can’t.”