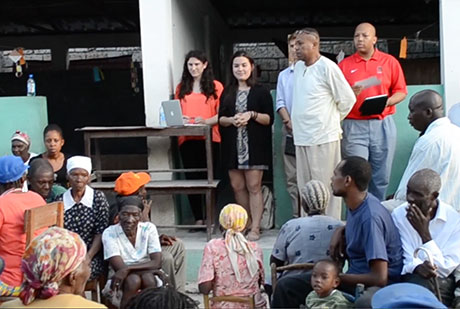 Jamie SunJae Choi
A rendering from one proposed design for the Petit Goave, Haiti, inclusive school by second-year architecture students Jamie SunJae Choi and America Castillo. The structure must be earthquake- and hurricane-resistant as well as fully accessible for students of all abilities.

First there was the place – a sliver of real estate along the national highway in Petit Goave, Haiti, with an earthquake-tumbled church out back. Certainly the need was real – to build an inclusive-education school for Haitian children with disabilities who lost everything in the 2010 earthquake, everything but their will to learn alongside able-bodied classmates.

But finding someone to put it all together? Create accessible school designs? Devise inclusive curricula for pupils with disabilities? Produce business and fundraising plans? What were the chances?

Pretty good, actually, with a team-building someone like Alexon Grochowski ’15, a policy analysis and management student in Cornell’s College of Human Ecology. By the first community meeting in Petit Goave (a coastal city of more than 100,000, 42 miles southwest of Port-au-Prince), in October 2013, Grochowski had lined up plenty of university resources:

Graduate students in the Cornell Institute for Public Affairs’ Consulting for Government and Nonprofit Organizations course would work with Grochowski. They would travel to Haiti during April 2014 to meet with community members and government officials and collaboratively devise plans for the school’s administration. Not stopping there, they would explore sustainable financial strategies and formalize partnerships with not-for-profit and government agencies in the U.S. and Haiti.

A studio course in the College of Architecture, Art and Planning would produce designs for a fully accessible, earthquake- and hurricane-resistant primary school for 200 pupils of all abilities.

Education students in a College of Agriculture and Life Sciences course, Inclusive Teaching for Adolescents with Disabilities, would recommend appropriate curricula, educational standards and best practices.

Nearly 100 undergraduate and graduate students throughout the university were set to collaborate in the project they came to call Centre d'éducation Inclusif (CEI), but first they needed to engage with Haitian parents, teachers and education officials.

“Even before the quake, the concept of including pupils of all abilities in a quality educational experience was becoming policy,” explains Cedric Comeau ’16, an urban and regional planning student who grew up in Haiti.

“Being disabled then meant having a birth defect, like blindness or a club foot,” says Comeau. “Suddenly there were hundreds of thousands of ‘disabled’ children. Many were just infants when they were found, alive but terribly injured in the rubble. Now these kids are ready for school, and the Haitian government wants them schooled with full physical, social and intellectual access.”

Grochowski knows that because the Haitian minister of education told her so, personally, in one of many meetings that lined up in-country cooperation with a spectrum of U.S. agencies, charities and programs, including Weill Cornell Medical College’s GHESKIO medical clinic in Port-au-Prince.

“This school won’t be something cranked out of a Cornell 3-D printer and plopped down in someone else’s country,” promises CEI team member, Joseph Nelson ’14, an environmental engineering major.

“The school might have composting toilets and rainwater collection, passive ventilation and other ways to cut electric usage,” Nelson adds. “It will have ramps – not steps – and be built by local workers, with local needs and wishes in mind.”

At their first community meeting to gather ideas, CEI leaders and local sponsors were expecting maybe 50 people, and they never mentioned “inclusif” in their advertising. But they heard that children of all abilities should be schooled together from an enthusiastic crowd of more than 250, some walking hours to get there.

The CEI team returns to Petit Goave this summer, bearing the best of the architectural designs from a May 7 Milstein Hall showcase, for another round of community meetings. Next fall students in CIPA’s international capstone course will continue to advise on a strategic plan for the school, seek funding from major donors, write grant proposals and explore other resources. The goal is to have the school open by 2016, and they have more alliances to build, more funding to solicit and more ideas to seek.

Comeau hopes Grochowski will take time from her frenetic organizing. He wants to show her the pride of the region, an ornate old house that withstood hurricanes and now shelters art treasures. But Nelson isn’t sure.

“When Alexon is passionate about something – like high-quality educational opportunities for all – you don’t get in her way,” the engineer says. “You get on the team.”

Grochowski, who first went to Haiti with a Cornell water project, has another explanation: “Ever since Fredo [Fredo Ignace, founder of Light Path 4 Haiti] told me the tremendous need for resources for people living with disabilities in Petit Goave, it’s like the stars aligned. Cornell students were eager for a worthy project. Our faculty advisers [Bryan Duff, horticulture; Aleksandr Mergold, architecture; Laurie Miller, CIPA] have been generous with their time, and the people of Petit Goave want this so much. It’s really going to happen!”