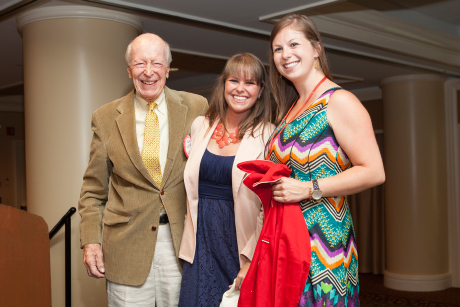 Robert Barker/University Photography
Austin Kiplinger ’39, chairman emeritus of the Cornell Board of Trustees; Samantha Berg '09; and Elizabeth Rapoport ’09 at the “Spirit of ’31” ceremony June 5 in the Statler Hotel.

Berg and her Reunion class co-chair, Elizabeth Rapoport ’09, accepted a “Cornell 2009” banner and a red Class of ’39 jacket from Austin Kiplinger ’39, chairman emeritus of the Cornell Board of Trustees, at a “Spirit of ’31” ceremony June 5 in the Statler Hotel. The ceremony linked the youngest returning class to three of the oldest classes attending Reunion.

“I have been duly authorized to pass on the banner from the Class of 1939, with the understanding that you will pass it on to the Class of 2089,” Kiplinger said.

More than 700 members of the Class of 2009 are attending their first Reunion this year.

Berg and Rapoport “attended last year to shadow our sister class of 2008,” Berg said. During last year’s ceremony, “it was amazing to see the amount of love and affection the Class of ’38 showed for each other, and how they passed that love and affection on to the younger class.”

Rapoport said that she and Berg are active in the Cornell Alumni Admissions Ambassador Network, which connects alumni with prospective students.

“We were elected [Reunion co-chairs] the day we graduated,” said Rapoport, president of the Cornell Club of Pittsburgh. “We came back last year to kind of see how everything worked.”

In his remarks at the ceremony, co-hosted by the Classes of ’39, ’44 and ’49, President David Skorton mentioned Tom Brokaw’s book “The Greatest Generation.”

“You are the greatest generation,” Skorton said. “It’s very hard to disagree with that.”

Skorton recapped some of the major events of those senior classes’ years at Cornell, including – for the Class of ’39 – the years following the Great Depression, the 1939 New York World’s Fair and the inauguration of Cornell’s fifth president, Edmund Ezra Day, in 1937.

“For the classes of ’44 and ’49, your student years were ripped apart by the war,” he said. They would remember students taking nursing and first aid classes on campus during World War II, he said, “and, in the fall of ’46, the overcrowded dorms and classrooms as Cornell struggled to accommodate returning veterans.”

Sigmund Hoffman ’44 recalled protests in front of Willard Straight Hall in 1941 over President Roosevelt’s Lend-Lease Act, which provided materiel to Allied nations in the months before Pearl Harbor.

Many students spoke out for and against the act, he said, and pacifist minister Norman Thomas also drew a large crowd when he spoke on campus.

“When I started here it was the beginning of WWII; I was a naïve 18-year-old kid, really,” Hoffman said. After graduation, he joined the military and studied Japanese – “preparing for the invasion,” he said. “And then Harry dropped the bomb.”

The annual “Spirit of ’31” ceremony was “the brainchild of an exceptional Cornellian,” Jim Mazza ’88, associate vice president of alumni affairs, told the attendees. The late Bill Vanneman Sr. ’31 planned the original ceremony three years ago to mark the first-ever organized 80th Reunion by a Cornell class.

Class of '39 plans a virtual gathering for 75th Reunion