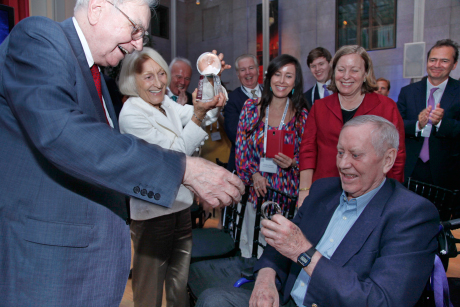 Glen Davis/Forbes Media
Chuck Feeney '56, right, receives the Forbes 400 Lifetime Achievement Award for Philanthropy, along with a watch, from Warren Buffett (who is the award's only previous recipient) June 17 in New York City. Feeney's wife Helga, at left, is holding the award.

The award was presented at the nearby Morgan Library by philanthropist and business icon Warren Buffett, who told an audience of 150 of the world’s leading philanthropists, social entrepreneurs and public officials that it was “a real honor to talk about a fellow who is my hero and Bill Gates’ hero. He should be everybody’s hero.”

Feeney, a prominent Cornell alumnus and well-known philanthropist, is founding chairman of The Atlantic Philanthropies. Since 1982, Feeney’s gifts and commitments through Atlantic to Cornell, which were originally made anonymously, have totaled nearly $1 billion.

In late 2011, Feeney and The Atlantic Philanthropies gave $350 million in support of the Cornell Tech campus in New York City. The gift was critical in allowing the university to begin all facets of its ongoing development, from the physical campus to its faculty and programs.

According to a story published on Forbes.com June 18, Feeney said: “It’s simple, really. You get more satisfaction from giving while you’re alive and involved. You learn and make adjustments to achieve the highest and best use of your resources. You get to see what you’ve helped accomplish. I am grateful that, by giving me this award, Forbes is encouraging other successful businessmen and women to more fully engage in philanthropy in their lifetimes.”

Cornell President David Skorton, who has called Feeney “an extraordinarily generous and modest donor,” said the Forbes award is a fitting honor and recognition of Feeney’s unparalleled example, which “has left a decades-long legacy of impact and change around the globe that will enrich lives and well-being for generations to come.”

Feeney’s years of support to Cornell through The Atlantic Philanthropies helped launch many programs, expansions and campus transformations, Skorton said, and his “extraordinary gift for what is now the developing Cornell Tech campus has already transformed our presence in New York City.”

“The award of the Forbes 400 Lifetime Achievement Award to Chuck Feeney is yet another fitting tribute to his extraordinary generosity, as is Warren Buffett’s acknowledgment of Chuck’s example, in having inspired both him and Bill and Melinda Gates in their own philanthropy,” Rhodes told the Chronicle. “Chuck’s impact at Cornell has been as generous as it is transformative. A score of areas at Cornell bear witness to his anonymous generosity. Quietly, thoughtfully, steadily, Chuck continues to enrich and improve the life of our university. This is one of the very rare occasions when we can publicly acknowledge him as Cornell’s foremost benefactor.”

In 2011, Feeney signed the Giving Pledge, a movement initiated by the Gateses and Buffett to encourage America’s wealthiest people to make a written commitment to giving away the majority of their money to charity.

By the time The Atlantic Philanthropies completes grantmaking in 2016, it will have given away $7.5 billion to promote education, human rights, science and health care around the world.