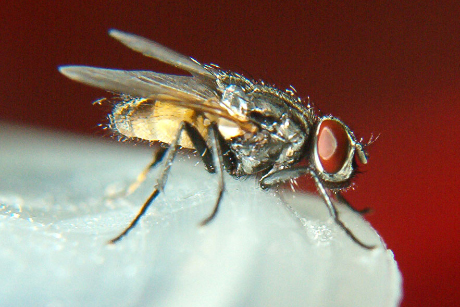 Old-fashioned fly swatters may be the most foolproof housefly killer, but for dairy farms, insecticides are the practical choice. Flies spread disease and a host of pathogens that cost farms hundreds of millions of dollars in annual losses.

Unfortunately, with the repeated use of the same insecticides, flies develop resistance through genetic mutations that make these products less effective.

Cornell entomologist Jeff Scott and colleagues have analyzed levels of resistance to six insecticides in flies, and they have identified the mutations that led to resistance in houseflies from cattle farms in nine states around the country.

What does Scott recommend? “Only use insecticides when they are needed,” he said. Some farmers decide, “it’s Tuesday and I need to spray. We recommend that farmers monitor [fly] levels and only use an insecticide when they will benefit from spraying.” In addition, Scott suggests alternating insecticides over a season or each month and using biological control agents such as tiny parasitoid wasps.

Genetic mutations are random and can occur from sunlight radiation or from errors in copying DNA, Scott said. “They happen by chance,” he said. “When you use an insecticide and one mutation lets a fly survive, then that mutation is carried forward in the population.”

Scott and colleagues published findings last fall in the journal Pesticide Biochemistry and Physiology and are working to understand three main mutations that confer pesticide resistance in houseflies.

“We think it is due to fitness costs,” where a mutation allows the fly to survive insecticides, but is not optimal in terms of overall health, Scott said.

Colleagues in this work include researchers from the U.S. Department of Agriculture (USDA) Agricultural Research Service and universities across the United States.